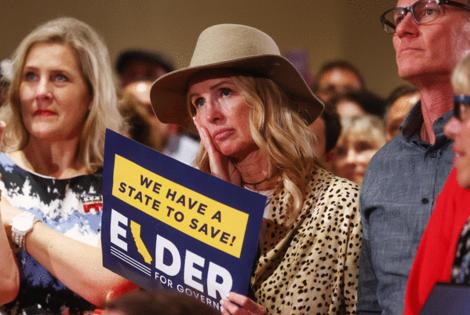 SACRAMENTO, Calif. — Larry Elder never should have been on the gubernatorial recall ballot. Neither should have Kevin Faulconer, Kevin Paffrath or Angelyne.

Only one name should have been presented to voters: Gavin Newsom. And just one question: Should he be recalled as governor?

If the answer had been yes — highly unlikely given Democratic dominance in California — then his replacement should automatically have been Lt. Gov. Eleni Kounalakis.

That's a lieutenant governor's only reason for existence, after all: to succeed a governor who leaves office in midterm.

Let the lieutenant governor be acting governor until the next regular election. Then elect someone to serve the rest of the recalled governor's term.

There are loud calls for reforming California's gubernatorial recall system after last week's wasteful special election that cost state taxpayers at least $276 million and accomplished nothing.

And the simplest, most effective reform would be to use the lieutenant governor's office as it was meant to be used: as the gubernatorial backup.

That would eliminate an incentive for recall mischief. No longer would an out-of-power party — the GOP in these times — be tempted to misuse the recall process in a backdoor effort to seize an office it couldn't win in a regular election with a much higher, unfavorable voter turnout.

A governor could still be recalled theoretically, although only two in the nation's history have been, including California Democrat Gray Davis in 2003. But recallers would have to ask themselves whether the cost and effort were worth it if success meant merely turning the office over to the lieutenant governor. And the answer would surely be "no."

You might think that California's tarnished recall system would, in effect, reform itself after the shellacking suffered last week by its abusers.

After all, they spent tens of millions of dollars and 18 months trying to recall Newsom, then ended up awkwardly beneath a crushing landslide. How soon will any other political game players dare try that again?

And what foolish political donors would again throw money at such a losing venture?

It makes sense that the system for recalling governors would be abandoned and therefore not need outside reforming.

But unfortunately, we're very likely to be dragged into another costly, distracting recall brawl unless the 110-year-old system is significantly remodeled.

"I think the recall process has been weaponized," Newsom said the day after his lopsided victory.

UC Berkeley Law School Dean Erwin Chemerinsky, citing polarization and opportunism, says: "We may be in an era where there's going to be more and more efforts to use recalls if changes aren't made."

Chemerinsky doubts the constitutionality of California's system because it allows a replacement candidate to be elected with fewer votes than the recalled governor receives. That's because of the dual-question process: 1. Shall the governor be recalled? 2. Who shall replace him?

A majority vote is required to recall a governor. But a plurality is all that's needed to replace him. So, a governor could draw 49% of the vote to keep his job and be recalled, then simultaneously be replaced by a candidate who wins just 25% of the vote in a crowded field.

Leaders of both legislative houses want to pass a reform measure — a state constitutional amendment — and place it on the ballot in 2022 or 2024.

"Our goal is to change the very undemocratic nature of the recall process," says Assembly Elections Committee Chairman Mark Berman (D-Menlo Park). "A governor can be recalled and replaced by someone who gets less votes than the governor.

"I'm worried that society is getting so polarized and we have such a very low threshold for qualifying a recall that it could happen every year. We need to create a system that can't be abused."

If that happened, the governor and lieutenant governor should run as a ticket rather than be elected separately, insists Bob Stern, former president of the Center for Governmental Studies. If they were from different parties, it would encourage mischievous recalls, he believes.

As unlikely as a governor and lieutenant governor from different parties seems today, California had that scenario five times within a 30-year period ending in 2009.

But I still like the idea of voters nominating a lieutenant governor rather than a gubernatorial candidate. Arnold Schwarzenegger might have chosen some bodybuilding buddy.

I'd also make it harder to qualify a recall measure for the ballot by raising the voter signature requirement. It's now 12% of the votes cast in the last gubernational election, the lowest threshold of the 19 states that permit recalls.

The percentage should be jacked up to 20%, the same as required for legislative recalls.

Another needed reform: Require a legitimate reason for the recall, such as malfeasance — not just an objection to a governor's policies. That's for a regular election.

UC San Diego political scientist Thad Kousser says, "The focus should not be on making recalls harder, but more representative. One of the things most troubling about this recall was that proponents were relying on a low turnout — a very small and unrepresentative electorate that didn't reflect California: older, whiter, richer."

He adds: "At least 4 million voters who answered the recall question ignored the second replacement question."

That's no way to elect a governor.

Want to recall the governor? Have at it, with reasonable hurdles. But let's be more democratic and sensible about replacing the governor — and greatly reduce the temptation for recall abuse.