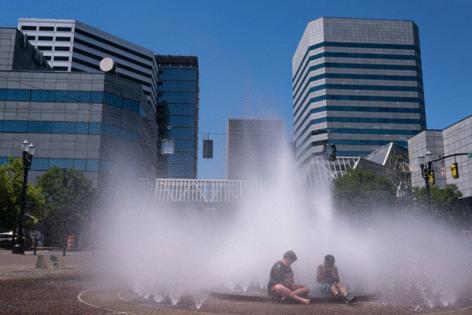 Climate change is having a breakout performance this year. Throughout the U.S., the slow-motion calamity long described in scientific studies and news articles has been visible to the naked eye or felt on tingling flesh — here too wet, there too dry, everywhere too hot. It’s only human to wonder where the higher, safer ground might be. Where to run?

The answer: No one really knows. It’s not just that the map of places prone to extreme events is expanding, making the question both more pertinent and more difficult. It’s that, even as the reality of global climate change becomes ever more certain, predicting its local effects remains anything but a sure bet.

Consider America’s two Portlands — Oregon and Maine. Tucked into the northwest and northeast corners of the Lower 48, each was thought to be a safe haven from the ravages of climate change. Not anymore.

In 2011, students in an urban studies class at Portland State University in Oregon were asked to consider the future impact of climate change on the region. Their 93-page report states: "Climate change impacts in Oregon are predicted to be less severe than in other areas of the country. Generally, models project warmer, wetter winters and hotter, drier summers in the Willamette Valley and other areas west of the Cascade Range. This will likely make the Willamette Valley a more desirable place for environmentally displaced people to locate."

Indeed, the Northwest is often cited as a potential retreat from climate chaos. The Willamette Valley, which runs from Portland south to Eugene, remains a very desirable location; about 70% of Oregonians live there. But the term “hotter, drier summers” has taken on some unexpected detail in recent months.

Fires have burned 380,000 acres of Oregon this year, following a hot, dry and fiery 2020. A half dozen major fires still burn in the state. Air quality is a major concern throughout Oregon. At one point this summer, it was considered good news that the smoke from forest fires was so heavy that the dense cloud that resulted might reduce temperatures by a degree or two.

In June, Portland reached a record 116 degrees in the midst of a freakish heat wave. The temperature, which followed record-breaking highs on each of the two previous days, could have been worse. In the village of Lytton, British Columbia, 400 miles north of Portland, the temperature hit 121 degrees. Even Seattle experienced triple-digit heat on three consecutive days.

As the Guardian reported, the heat wave “put a torch to a comforting bromide that the region would be a mild, safe haven from the ravages of the climate crisis.”

The heat wave of 2021 may eventually be viewed as a dividing line between the Before and After Times in the Northwest. “The problem with calling this a once-in-a-1000-year event is that the climate system is not in a balanced state,” the Oregon Climate Office tweeted in June. “The past is no longer a reliable guide for the future. These events are becoming more frequent and intense, a trend projected to continue.”

Portland, Maine, is another place that has received attention as a potential refuge from climate chaos. It makes sense. Portland is cool and coastal while being less vulnerable to the sea rise that is already complicating life in many East Coast cities. As one climate scientist told the New York Times in 2016: “Portland is high enough that certainly for the next few centuries it’s not going to have significant sea-level rise.”

On the other hand, Portland is not exactly balmy, with an average low temperature in January of 13 degrees. So any prospect of the city getting colder is cause for concern.

To understand how that could happen, it’s necessary to understand the evolution of the Atlantic Meridional Overturning Circulation, the ocean current system of which the Gulf Stream is a part. The AMOC, as it’s known, transports warm surface waters up the East Coast of North America before crossing the Atlantic to Northern Europe.

A study published in August in the journal Nature Climate Change notes that, over the last century, “the AMOC may have evolved from relatively stable conditions to a point close to a critical transition.” The change to the AMOC is related to a North Atlantic “cold blob” created by a melting Greenland ice sheet and greater rainfall in the region.

The potential outcome of this global atmospheric and underwater turmoil is colder water off the coast of Portland. Instead of getting a little warmer from climate change, Gordon writes, Maine’s largest city might get a little cooler. Scandinavia and the U.K. might get a lot cooler.

The unreliability of micro trends within a relentlessly advancing macro trend of global climate change is a recurring feature of scientific discussions. Earlier this year I talked to hydrologist Lisa Micheli, CEO of the Pepperwood Preserve, a climate research project in Sonoma, California. Northern California’s drought has been severe and pervasive. In recent years, fire has twice scorched the preserve where Micheli works.

Yet Micheli made a point of noting that uncertainty, as much as anything, still calls the tune. As parched and smoky as the local climate is, it still has the potential to change radically from the path it has been traveling, ultimately becoming wetter instead of drier.

Such uncertainty makes it hard to produce those “Best Places to Ride Out the Climate Apocalypse” features. Boise, Idaho, for example, was cited on one list earlier this year as being “sheltered from the harsh effects of climate change. The city is at low risk of environmental disasters.” A headline from the Idaho Statesman this month offers a somewhat different take: “More Wildfire Smoke, Poor Air Quality for Boise. As Summer Lingers, When Will It Clear?”

Meanwhile the West Coast and Northeast, where more than 100 million Americans reside, have also had a rough summer, with intimations of rougher times to come.

In the West, dry land and intense heat are making fires hotter, more voracious and harder to fight. In California alone, 2 million acres have burned in 2021, with 3,000 structures destroyed. Given that last year was the hottest and most destructive in California history, the pattern is not encouraging.

In the East, New Jersey and New York are drying out after rains and floods that left death, destruction and a knot of insurance claims in their wake. On Sept. 1, Hurricane Ida dropped as much rain in Central Park in an hour, 3.15 inches, as Chicago typically gets for the whole month of September. (Ida broke the record established in New York just the week before by Tropical Storm Henri.) More than 50 died as the remnants of Ida visited the Northeast, most in highly built environments that might once have seemed impervious to nature.

As global climate changes in locally threatening ways, millions of Americans will experience freakish weather events, and the particulars of that lived reality will increasingly exert themselves in public debate. Many people will no doubt transition, perhaps quite quickly, from denying or ignoring climate change to demanding that their property and lifestyle be protected from it.

Scientific uncertainty about the specific effects of climate change will continue. But the debate over the fact of climate change, which in the U.S. has been so long hobbled by propaganda and political reaction, is essentially over. Denialism is steadily being consumed by flames in the West, storms in the South and floods in the East and Midwest. The fight over who will pay, how much, and to protect whose property, has yet to begin.

Francis Wilkinson writes about U.S. politics and domestic policy for Bloomberg Opinion. He was previously executive editor of the Week, a writer for Rolling Stone, a communications consultant and a political media strategist.

Even as he is surrounded by loving friends and family, actor Alec Baldwin may well feel all alone in the world. In a split second, he learned how capricious life can be, and how we have far less control over ourselves and ...Read More

The Clark Fork River drains much of western Montana, bringing water from the Crown of the Continent to the Columbia River and the Pacific Ocean. My daily commute via bicycle crosses the Clark Fork most days and has allowed...Read More

Days after the Jan. 6 assault on the U.S. Capitol by a mob of Donald Trump supporters intent on overturning Trump’s election loss, freshman Rep. Cori Bush of St. Louis introduced her first piece of legislation, which ...Read More

"This Institution supports the Constitution of the United States, its Bill of Rights and its method of representative government."

That's the statement President Herbert Hoover presented to the Board of Trustees of ...Read More

In the 1980s and ‘90s, California embarked on a disastrous social experiment. Legislators embraced reactionary law-and-order policies that ratcheted up punishment in criminal cases. The negative impact of these policies ...Read More

A bit of emotion crept into a 1998 West Des Moines, Iowa, school board election debate when the budget came up. Challenger Alan Koslow faulted the administration for attempting to cut the music program and scholarships to ...Read More