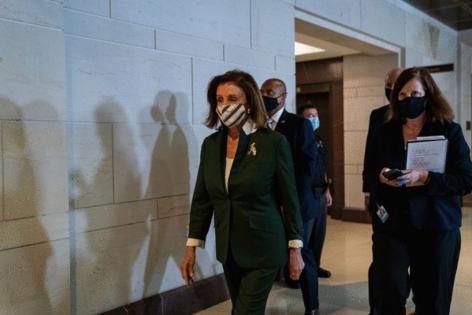 The battle over Democrats' ambitious spending plan is heating up in Congress, but one piece of the outcome is already clear: The $3.5 trillion price tag is being whittled down.

That will disappoint progressives, who see the budget plan as their best chance in a generation to enact big changes in domestic policy from universal pre-K and free community college to expanded Medicare and Medicaid and subsidies for clean energy.

But as a practical political matter, it's a good thing for Democratic members of Congress who face tough races in 2022 — and for their party's tenuous chances of retaining its razor-thin majorities in the Senate and House of Representatives.

Here's the Democrats' problem: Most of the individual spending proposals in the plan are broadly popular among voters, but that doesn't necessarily translate into solid support for the whole package.

A USA Today/Suffolk University poll last month found that the spending plan was supported by a bare majority, 52%, of Americans — and that was before Republicans began barraging the proposal with objections, aimed mostly at the price. (A "massive, reckless taxing and spending spree," Senate GOP leader Mitch McConnell of Kentucky said last week.)

"There are things [in the plan] that voters think are valuable: nursing homes, child care, pre-K," Republican pollster David Winston said. "But people question whether the country can do them at a reasonable cost."

Some Democrats worry about the cost, too.

Sen. Joe Manchin III of West Virginia, the most conservative Democrat in the Senate, has long said $3.5 trillion is too much — and in a 50-50 chamber, the plan can't pass without his vote.

Manchin isn't the only stumbling block. Sen. Kyrsten Sinema of Arizona has also objected to the price tag. Sen. Jon Tester of Montana says he won't support any plan that includes deficit spending. Others have expressed qualms privately, especially over proposals for higher taxes.

Sen. Richard J. Durbin of Illinois, a practiced vote-counter, injected a dose of reality into the debate last week: $3.5 trillion is a "starting point for negotiation," he said. "It's not necessarily the endpoint."

House Speaker Nancy Pelosi of California, trying to keep progressives in her caucus lined up behind the plan, has described it in expansive terms.

"It's not incremental," she brags. "It's transformational."

"I would ban that word," he said. "Most people don't want bold, inspirational change. They want bite-size things."

If Pelosi and Senate Democratic leader Charles E. Schumer of New York pass a plan even half the size of the $3.5 trillion that's under debate, it would still be a titanic achievement. And less focus on that top-line number might allow Democrats to focus attention on parts of the plan that are both broadly popular and easy to understand.

"There are benefits to having easy-to-describe things that people like," Shor argued.

The most popular: empowering the federal government to negotiate prescription drug prices down. High on the list: adding dental benefits to Medicare (a favorite of Vermont Sen. Bernie Sanders) and increasing Social Security payments.

Not as high: federal subsidies for child care.

"Giving things to old people is a real political winner; they're sympathetic and there are a lot of them," Shor noted. "The political upside of child care is more limited. Relatively few people are parents at any given time."

Even lower in popularity: spending to combat climate change.

"Most people don't care about climate change very much, except for very liberal white people," Shor warned. "Almost everyone else thinks poverty is more important than climate change."

Those are the elements that Democrats will be debating, along with proposals for higher income taxes on the wealthy and higher taxes on corporations.

They already know they face an uphill battle in the 2022 congressional elections. The party that holds the White House almost invariably loses seats two years after a presidential election.

Their best chance to defy those odds probably lies in passing a much slimmer budget plan — one that focuses, as Shor advises, on measures with broad public support.

And if Manchin and other Senate moderates hold firm, they won't have much choice.