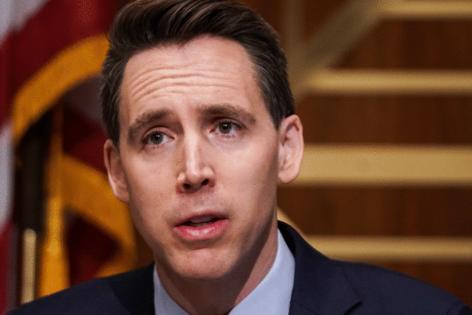 Missouri’s best-known insurrectionist, Sen. Josh Hawley, is still trying to accomplish what he could not pull off with his power-to-the-rioters raised fist on Jan 6.

You’re not going to believe this, but in a Senate floor speech, he called on President Joe Biden to resign.

It’s a difficult speech to watch, shamelessly exploiting as it does the deaths of U.S. servicemen and servicewomen for political gain.

But despite its contradictions, hyperbole and misreading of history, we must watch, because Hawley’s threat to our republic is real and ongoing. The senator’s desire to overthrow the people’s choice for president has not abated.

“This president is a disgrace,” Hawley intones. “He had dishonored this country with his shameful leadership in this crisis. And it is time for him to resign.”

Hawley is referring to our recent withdrawal from Afghanistan.

Let the record show what Hawley desperately wants us to forget: He was an enthusiastic supporter of abandoning Afghanistan — not on Aug. 30, when the final troops departed, but months earlier, in May.

“President Biden should withdraw troops in Afghanistan by May 1, as the Trump administration planned, but better late than never,” he tweeted on April 13. “It’s time for this forever war to end.”

Apparently, Hawley’s imitation of a peacenik has a sell-by date, which is whenever the Missouri Republican decides there are partisan points to be made.

In fact, the U.S. made mistakes when it removed its remaining troops from Afghanistan. The White House underestimated the speed with which the Taliban — reinvigorated by Hawley’s pals, Mike Pompeo and Donald Trump — would capture the country we defended for 20 years.

That led to confusion and difficulty on the ground, including the deaths of 13 Marines.

But those challenges were not unique. And they should not obscure the results of the evacuation: Some 130,000 people were airlifted from the country, “one of the largest mass evacuations in U.S. history” according to the Associated Press.

Does Josh Hawley, or anyone, think a withdrawal on May 1 would have been more successful or orderly than the one in August? No. Would Trump have done better? The idea is laughable.

Hawley’s speech was a classic exercise in second-guessing, by a man who sided with treasonous rioters two weeks before Biden’s inauguration. It’s the way all cowards operate: Sound brave, from a distance, then head for the bunker when trouble erupts.

For two decades, while Missouri’s sons and daughters dug holes in the Afghan mountains at the request of presidents of both parties, Hawley was busy flying to Yale and Stanford and St. Paul’s in London, burnishing his resume.

Hawley might have enlisted. He did not. Every soldier who served in Afghanistan had more courage than Josh Hawley will ever show, or know.

Not over the kind of corruption that was endemic in the last administration, of course, but because he says so.

Nothing about this call for mass resignations is serious. Yet Missourians should never forget Hawley’s attempt to put his own ambition ahead of the security of the United States.

And the House select committee investigating the insurrection at the Capitol should deeply investigate Hawley’s role in the events of that awful day. When our democracy itself was under attack, he stood with those attempting to bring it down.