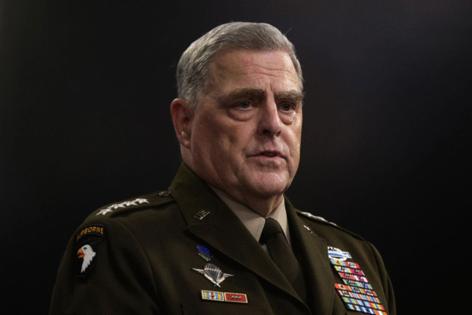 MAGA disciples talk of Trump Derangement Syndrome to dismiss the former president’s critics — the majority of Americans — as simply unhinged.

What we actually suffer from is Deranged Trump Syndrome — the sense that Donald Trump was and is capable of just about any noxious act.

Few would have more reason to be afflicted than the nation’s highest-ranking military officer, given his many encounters with the cracked commander in chief. DTS apparently drove Gen. Mark A. Milley, the four-star Army general who is the chairman of the Joint Chiefs of Staff, to contact his Chinese military counterpart, Gen. Li Zuocheng, twice — once before election day and again two days after the defeated Trump incited his MAGA army to insurrection Jan. 6 — to reassure the rival power that the United States had no hostile intentions.

We need more information about Milley’s thinking, and he’s sure to be asked to provide it when he testifies later this month before senators about the flawed withdrawal from Afghanistan. But based on what’s been leaked from a book by Bob Woodward and Robert Costa of The Washington Post, to be released next week, Milley mostly deserves our commendation.

Set aside for a moment that, as was often said, Trump put the country in uncharted territory given his penchant, delight even, in flouting norms, the Constitution and the rule of law.

For years, under presidents of both parties, national security officials kept lines of communication to their counterparts in the Soviet Union, now Russia, and China — to avert miscalculations that could provoke war. Milley continued that tradition. As his spokesman has said, Milley’s calls with Chinese and other foreign counterparts “were in keeping with” his responsibility “to maintain strategic stability,” and were coordinated with other officials at the Pentagon.

If Milley indeed had reason to fear what Trump might do to maintain his hold on power — stage a coup, order an attack, even a nuclear strike — then we should celebrate that Milley took action. This is the same man who, in the summer of 2020, dressed in combat fatigues, accompanied the swaggering Trump through Lafayette Park, across from the White House, after it had been violently cleared of peaceful protesters for racial justice, to make way for Trump’s Bible-toting, electioneering photo op at the nearby historic church.

We already knew how desperately worried Milley was about a coup in Trump’s final days from another recent book by Washinton Post reporters Carol D. Leonnig and Philip Rucker. “This is a Reichstag moment,” Milley reportedly warned his subordinates. “They may try, but they’re not going to f— succeed.”

The Woodward and Costa book disclosed more information about a previously reported conversation between Milley and House Speaker Nancy Pelosi, D-Calif., on Jan. 8 — the same day as his call with Li — in which she fretted about Trump igniting a nuclear attack. When she called Trump “crazy,” the book relates, Milley replied, “I agree with you on everything.”

General, tell us more. For all the books that document just how crazy Trump was as president, it’s time to hear it directly from Milley, and others, so that the country knows what better guardrails might be erected against mad rulers.

Many have supported Milley, but louder have been the detractors who allege that he violated the founding principle of civilian control of the military. It is questionable, troubling even, that in reassuring Li, the Chinese general, that the United States was not about to attack, Milley reportedly said he would call “ahead of time” if it were. Yet he wasn’t treasonous, as some charge.

Not all of Milley’s attackers are Republicans, echoing Trump’s talk of treason. But many are. If those Republicans showed the same outrage toward the former president — the first in history to refuse to abide by the peaceful transfer of power and who is still whipping up his supporters to undermine democracy itself — then they might deserve to be taken seriously now.

Even as he is surrounded by loving friends and family, actor Alec Baldwin may well feel all alone in the world. In a split second, he learned how capricious life can be, and how we have far less control over ourselves and ...Read More

The Clark Fork River drains much of western Montana, bringing water from the Crown of the Continent to the Columbia River and the Pacific Ocean. My daily commute via bicycle crosses the Clark Fork most days and has allowed...Read More

Days after the Jan. 6 assault on the U.S. Capitol by a mob of Donald Trump supporters intent on overturning Trump’s election loss, freshman Rep. Cori Bush of St. Louis introduced her first piece of legislation, which ...Read More

"This Institution supports the Constitution of the United States, its Bill of Rights and its method of representative government."

That's the statement President Herbert Hoover presented to the Board of Trustees of ...Read More

In the 1980s and ‘90s, California embarked on a disastrous social experiment. Legislators embraced reactionary law-and-order policies that ratcheted up punishment in criminal cases. The negative impact of these policies ...Read More

A bit of emotion crept into a 1998 West Des Moines, Iowa, school board election debate when the budget came up. Challenger Alan Koslow faulted the administration for attempting to cut the music program and scholarships to ...Read More