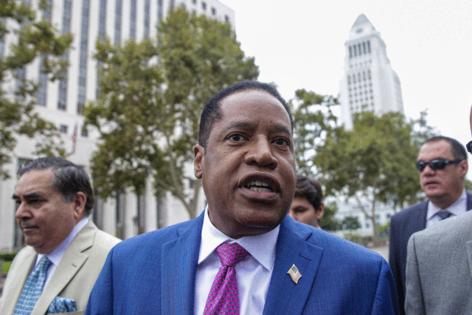 Any way it's sliced, the recall election wound up being a big boost for Gov. Gavin Newsom's political future. And it was another self-inflicted, bruising bust for California Republicans.

Larry Elder was rudely awakened from his dreams of becoming California's governor. Newsom's landslide victory proved what most of us already knew: No Trumpian conservative can win statewide office in this liberal-leaning state.

Elder should go back to hosting his talk radio show, where he'll surely benefit from the added notoriety achieved during two high-profile months on the campaign trail.

"Republicans need to have a candidate who fits the California culture, and that certainly isn't Elder," says Republican political analyst Tony Quinn, coeditor of the Target Book, which handicaps state political races.

The Democratic Party scored a major triumph with national implications after rallying with its allies to help Newsom stave off the Republican-led recall attempt.

"Democrats found a way to keep Donald Trump alive and run against him," Quinn says. "That's the big story. They warned about 'Trump taking over.' And it worked brilliantly. Democrats found a formula here that's really going to work on the national level."

At least potentially in blue states and some purple as Democrats fight next year to protect their fragile control of the U.S. Senate and House.

"We may have defeated Trump" in 2020, Newsom declared in victory remarks Tuesday night. "But if you look around, Trumpism is not dead in this country."

But the former president's lemmings could be in mortal political danger if they continue to follow him while running for competitive seats in swing districts.

One winning issue Democrats found for blue and perhaps purple states was support for vaccine and mask mandates. Newsom has decreed the mandates for public employees and schoolteachers.

Republican candidates seeking to replace Newsom railed against his coronavirus policies. But many voters are jittery about the Delta variant. And election exit polls showed that Newsom's policies were supported by roughly two-thirds of voters.

Newsom's huge win places him in excellent position for a reelection romp next year.

For starters, the governor has $24 million already stashed for his 2022 race.

Beyond the unprecedented financial head start, Newsom's impressive triumph almost guarantees he won't face a prominent Democratic rival in the open primary. None will dare challenge an incumbent governor who has scored two landslides — his 2018 election plus beating the recall.

"No serious Democrat would think about competing against him," says former Democratic consultant Bob Shrum, director of the Center for the Political Future at USC.

Garry South, chief strategist for former Democratic Gov. Gray Davis, who was recalled in 2003 when Republican Arnold Schwarzenegger was elected, agrees: "Any serious Democrat thinking about challenging Newsom in 2022 — that's off the table. There's no rationale for challenging him."

Another plus for Newsom is that all the Republican ammunition we know about that could be used against him already was fired during the recall campaign. And he survived. It will be old, spent stuff next year.

This includes attacks on him for his COVID-19 management — blank cartridges, as we learned Tuesday — an inexcusable multibillion-dollar scandal involving unemployment benefits, the hypocritical French Laundry dining fiasco and an off-putting personality. None of it was potent enough to seriously injure him.

Mindy Romero disagrees. She's a political scientist who heads the Center for Inclusive Democracy at USC.

"Because he got so much attention while this was a nail-biter, it made him look weaker," Romero says. "He had to do a lot to get the win he should have gotten easily. He pulled out the big guns — Biden, Harris, Warren, Bernie — and he never should have needed to do that.

"I think he's been hurt, no matter what."

Newsom must have been channeling Romero's advice. He ended his victory remarks by declaring he was "humbled and grateful."

The reason a lot of people who weren't wild about Newsom voted for him was because he made them scared of the lead Republican alternative: Elder.

If Elder is tempted to run again next year, Newsom might pay his entry fee.

The Republican most experts previously thought would have the best chance of upsetting Newsom was moderate former San Diego Mayor Kevin Faulconer. But he ran a nerdy campaign and was obliterated by Elder — another plus for Newsom.

Perhaps Faulconer should run next year for lieutenant governor — and potentially give Newsom fits as his backup.

Republicans should finally do the math and acknowledge they're outnumbered 2 to 1 by Democratic voters in California. They can't win a statewide office without attracting Democrats and independents. And they can't win with a conservative not named Ronald Reagan — and maybe he'd even lose in this polarized era.

Perhaps Republicans have given up all hope of ever again winning a statewide election. They're content to merely sound off and squawk about a deteriorating California without jockeying into position to actually do something.

Whatever. They just wasted a lot of time, energy and money — taxpayers' and donors' — acting like masochists.