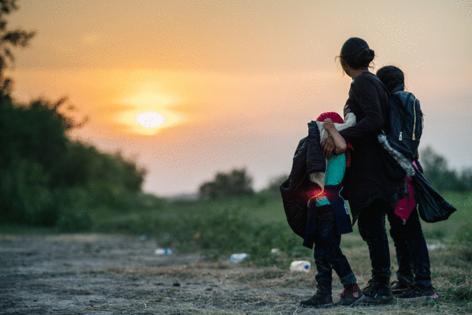 It was after dark at the border, and a U.S. Border Patrol agent used his body to shield a migrant father and child in his custody from Anthony Agüero, a Jan. 6 Capitol rioter who was trying to film them to spread QAnon-style propaganda about child sex trafficking at the border.

"Step back," the agent, whose face is blurred in Agüero's video of the exchange, told him. For months, Agüero had been filming migrant families in U.S. custody. The agent in the video stayed firm, telling Agüero he was "invading" his space. Agüero, who has a history of criminal violence, claimed to be a journalist concerned about children. But he lost his temper, crying, "The only invaders here are the ones you're protecting, bro!"

Agüero is part of a growing network of self-proclaimed social media "reporters" and "activists" focusing on the border as a place of depravity and fueling the QAnon delusion about a satanic cabal of pedophilic Democratic elites — using images of migrant children.

A separate video posted this month by Agüero, who has previously shared QAnon and Pizzagate propaganda, has been viewed tens of thousands of times on social media and aired on the right-wing cable channel Newsmax on Sept. 6. In the film, children appear to sleep in their parents' arms while detained by agents outside. Agüero says of the kids, without evidence: "They're sedated. They are sedated!" Newsmax host Rob Schmitt aired the video on a segment, saying: "This is some pretty scary stuff."

Agüero tweeted a longer version of the video with his livestream brand "Border Network News," writing, "PATRIOTS TO THE BORDER." (Agüero has previously patrolled the border with vigilantes and chased terrified families he compared to "roaches.") The online film of alleged sedation features horror-film music and zooms in on children's faces as he questions them: "Did they treat you well, my queen?" A caption reads: "Single adult males importing children BY THE MASSES."

The images suggest that the children are being trafficked by strangers who drugged them. There's no evidence any of it is true, but it's effective in stirring up hatred of migrant adults.

Rep. Nanette Diaz Barragán (D-Calif.), a member of the House Homeland Security Committee, called this kind of propaganda "disgraceful." She told me, "The goal of these conspiracy theorists is to distract from reality in order to fuel hysteria and xenophobia. It is factually wrong and it is morally wrong."

As a CBP spokesman told me: "We have zero proof that there's been any sedating of children on the border." He added that agents have been told not to engage with Agüero but that they can't stop him from filming vulnerable families in public.

Other social media influencers have shared Agüero's film, including Landon Starbuck (Landon Newsom), who sang the national anthem at the 2021 Conservative Political Action Conference and previously shared pro-Trump misinformation about child trafficking. Her husband is running for Congress in Nashville.

Starbuck and Agüero's girlfriend, who calls herself Natly Denise, are organizing a Sept. 25 rally in McAllen, Texas, "to defend our borders and the innocent children being smuggled, drugged, raped and trafficked." The advertising falsely claims President Biden's policies "fuel the epidemic of modern day slavery."

David "Niño" Rodriguez, a retired El Paso boxer with more than 300,000 followers across several social media platforms, has also collaborated with Agüero. Recently on Steve Bannon's "War Room" show, Rodriguez said: "Anybody can go pick up a kid. You want a kid? Go pick up a kid."

For QAnon conspiracy theorists, the use of migrant children in their propaganda conveniently conflates voluntarily traveling to the border for asylum with trafficking, which involves forced labor or sexual exploitation. The fantasy effectively energizes support for draconian border policies known to endanger migrants, such as the Trump administration's so-called Remain in Mexico policy, which has resulted in migrant kidnappings and killings.

According to Kids in Need of Defense, a nonprofit agency focused on protecting migrant children, most foreign trafficking victims actually arrive at ports of entry, including airports. Half of all trafficking victims in this country are U.S. citizens or permanent residents, often enslaved by people they know. While QAnon casts Trump as a hero, child sex trafficking prosecutions declined under his administration.

Polaris, a nonprofit that runs the National Human Trafficking Hotline, has warned that false claims about trafficking "can spin out of control and mislead well-meaning people." The hotline has been overwhelmed with false reports; disinformation harms real victims by diverting resources. These lies also help violent extremists recruit well-meaning people.

Polaris' chief technology officer, Anjana Rajan, told me, "Disinformation about human trafficking serves as a gateway narrative to radicalize susceptible audiences on every platform and encourage them to perform acts of violence and potentially terrorism." She pointed out that both Ashli Babbitt and Rosanne Boyland, who died as part of the mob attacking the U.S. Capitol on Jan. 6, were radicalized by child sex trafficking conspiracy theories — which are especially effective with women. But of course, many in the QAnon crowd — like Agüero — have no interest in tackling real causes of human trafficking, rooted in economic and racial inequities.

Sophie Bjork-James, a Vanderbilt University assistant professor of anthropology who studies QAnon, says the delusion survived Trump's loss thanks to local Republican politics and now drives anti-COVID masking and anti-vaccine hysteria, among other things. The appeal of the QAnon border variant is not all that surprising. In this reshaping of reality, she said, "Anti-immigrant Americans can be the saviors of immigrant children and the children's parents become the villains."

People like Agüero — who has an ally in Rep. Marjorie Taylor Greene (R-Ga.) and QAnon-promoting congressional candidates — could usher in a new era of hatred. We must recognize the threat their disinformation poses to our democracy and work to stop its viral spread.