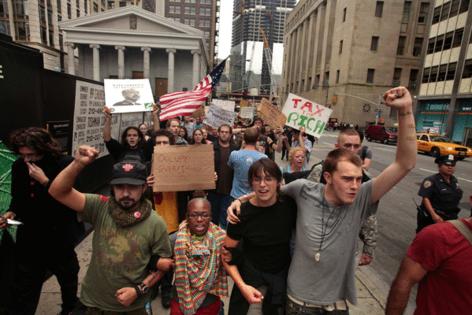 First, they ignored Occupy Wall Street. On the late-summer morning of Sept. 17, 2011, there were no major news organizations present — not even the hometown New York Times — when a ragtag army of a couple hundred protesters fed up with America’s gross inequality tried to set up camp in the heart of Manhattan’s Financial District and were pushed back by a massive police response to an unknown spot called Zuccotti Park.

Then, they ridiculed it. As the crowds of campers in the park re-dubbed “Freedom Plaza” swelled and protests spread to scores of other U.S. cities and then around the world, the usual suspects in right-wing media rediscovered the canard about “dirty, smelly hippies” to whip up resentment — rather than address the issues that marchers were raising, such as (then) three decades of soaring income inequality, massive student debt, and U.S. military spending.

Then, they fought it. Big-city mayors like New York’s Michael Bloomberg or Philadelphia’s Michael Nutter stopped pretending to respect the free-speech rights of demonstrators and called in militarized police who squirted pepper spray and swung nightsticks to clear out the tent cities, or to kettle and arrest the Occupiers on trumped-up charges.

Today, on the cusp of its 10th anniversary, Occupy Wall Street is winning.

Scores of cities, several states, and even some large corporations have adopted the $15 minimum living wage that had seemed a pipe dream on that September Saturday in 2011 when NYPD officers ringed the “Raging Bull” statue in Lower Manhattan. The student loan crisis — which no one in power was talking about a decade ago, even as the debt load skyrocketed toward its current $1.7 trillion — is finally on the political front burner in Washington. A new president, who was still a cautious, centrist Democrat back when the Occupy protests erupted, has since adopted a progressive agenda — already cutting child poverty in half, as Congress debates a slew of ambitious social programs and funding them by taxes on “the 1 Percent,” a term launched by the 2011 protests.

It’s ironic, because conventional wisdom hardened within the mainstream media by the end of 2011 that Occupy Wall Street and its satellite protests were a briefly electrifying failure — lacking a central mission, riven by disagreements, its protest camps subsumed by the unhoused and others on the margins of a cruel society. Those pundits didn’t see the smoldering embers — the causes discovered and the relationships formed during that brief supernova — that would reignite in a Bernie Sanders presidential campaign that would move Democrats to the left, and in diverse movements like the Fight for 15 or eliminating student debt.

The fascinating thing about the Occupy protests is that no one — including the established stalwarts of the political left — saw them coming. Few people had heard of Adbusters, the radical magazine that announced the protest that summer with an illustration of a ballerina atop the “Raging Bull” statue and the question, “What is our one demand?,” or knew about secret planning meetings that New York activists like the late David Graeber were taking part in.

But timing is everything. Around the world, 2011 was a year of revolutionary upheaval, beginning with the so-called Arab Spring and the massive Tahrir Square uprising that toppled the Egyptian government and became something of a template for Zuccotti Park. Here at home, young people had initially channeled their angst over the Iraq War fiasco and the 2008 financial crisis into the “HOPE”-emblazoned presidential campaign of Barack Obama. But hope was fading two-plus years into his gridlocked presidency.

New Yorker Winnie Wong came out that first morning after seeing a Twitter hashtag for the protest. “We were fresh off the crash and in 2011 we were really starting to see the effects, and it became very clear the divide between middle class families — working people and the rich — was growing wider,” she recalled. “I saw this as a different type of call, because it didn’t specify a single issue.”

Before the summer of 2011, Joanne Stocker-Kelly — from Exton in Philadelphia’s western suburbs, then a 24-year-old student at Cabrini College — had never done anything more political than registering a few of her high school friends to vote. But the shocks of the 2008 crash — learning one day that the Dow had dropped 500 points as she sat through a class — and her mounting student debt, which was even worse for classmates who’d eventually owe as much as $100,000, shook her from the bubble of her suburban upbringing.

“It was this idea that democracy was supposed to be beholden to us, to the people,” Stocker-Kelly told me this week in a phone interview from Ireland, where she lives today. Instead, she only saw “corporate control of the country.” Drawn that September to New York for an event around getting big money out of elections, she ended up joining the Occupy Wall Street protest and camping out in Zuccotti Park for a couple weeks.

Like many of the Occupy participants, Stocker-Kelly was somewhat put off by the cacophonous and contentious daily general assemblies in the park, but found new energy and passion in the working groups around an array of issues that ranged from feminism to limiting campaign contributions to legalizing marijuana. While the Occupy movement was national news through the fall of 2011, the combo of internal dissension and a well-coordinated, heavy-handed police crackdown — here in Philadelphia, more than 50 people busted by cops were acquitted and settled an unlawful arrest lawsuit with the city for $200,000 — mostly ended the protests by that Thanksgiving.

Critics who called Occupy a failure — noting it never agreed on that “one demand” as called for in the Adbusters meme — missed the offshoots and alliances that continued working to re-energize a once moribund progressive movement in the U.S. For example, a then-31-year-old progressive filmmaker from Manhattan named Astra Taylor, who also joined the Occupy Wall Street protest that first September Saturday, was drawn to the working group around debt, which organized a nationwide protest that fall as outstanding student loans passed the $1 trillion mark. From that sprung the Debt Collective, an ongoing campaign that has helped everyday folks retire $2 billion in debt and is leading the fight for college loan forgiveness.

Other Occupy Wall Street veterans looked to target electoral politics. At the 2016 president election neared, former Occupiers like Wong and Charles Lenchner, who’d been the technical guru at Zuccotti Park in 2011, launched Ready for Warren hoping to draft Massachusetts Sen. Elizabeth Warren, a withering critic of Wall Street. When Warren didn’t enter the race, the group quickly morphed into the People for Bernie Sanders, and used its social-media savvy to play a key role in convincing young people to rally behind a septuagenarian democratic socialist senator from Vermont.

“I don’t think Bernie would have become a mainstream candidate if Occupy hadn’t happened,” Wong told me. It’s hard to argue with that. She recalled a moment in the 2020 campaign when Sanders told a large rally crowd to look at the person next to them and say, “I’m willing to fight for somebody I don’t know” — the essence, she argued, of both his campaign and the 2011 protests.

In what was becoming a familiar pattern, Sanders didn’t win his spirited battles for the Democratic nomination in 2016 and 2020. Yet the Vermont senator and a reconstructed American left were winning the war of ideas, pushing the Democratic Party in a much more progressive direction than seemed possible amid the stifling centrism of the Clinton era. Today, Sanders is one of the most powerful voices in Washington as chair of the Senate Budget Committee, and both he and Warren have played pivotal roles in working with President Biden on his roughly $6 trillion agenda which — while much of it dangles in the air this fraught autumn — would would transform America on the scale of the New Deal or the Great Society.

In other words, Occupy Wall Street was the spark behind arguably the most important U.S. political movement of the 21st century — so why is that so hard to see?

For one thing, it’s had to compete for oxygen with the other, more arresting political movement of our time — the right-wing authoritarian populism led by Donald Trump. What’s more, there were times in the 2010s when the class critique of the Occupy movement felt at odds with the decade’s other major protest movement, the Black Lives Matter crusade forged in 2014 in Ferguson — although those differences melted a bit when veterans of both movements protested George Floyd’s 2020 killing. On the far left, the lack of progress on issues like single-payer health care and the long way to go on matters like college debt feels like the glass is more than half-empty, still.

But the legacy of the Occupy movement is everywhere — in the words and phrases like “income inequality,” “living wage,” and “we are the 99 Percent” that barely existed on September 16, 2011, in calling attention to the brutal militarization of the American police who pepper-sprayed them, in the progressive prosecutors like Philadelphia’s Larry Krasner who’ve been elected since, and in the serious attention paid to ideas like free public universities that felt unreachable on this date just 10 years ago.

But the greater impact from the brushfires of Zuccotti Park is arguably the way it changed the people who participated — people like Wong, who helped organize the 2017 Women’s March and was a senior adviser to Sanders’ 2020 campaign, and Stocker-Kelly, whose interests in women’s issues, conflict, and the Middle East propelled her into a career in journalism, writing about places like northern Iraq for publications such as The Guardian. She embarked on her journey without earning her degree from Cabrini — something she recalls ever month when she signs her $300 student-loan check.

“I don’t think I’d be doing what I’m doing” if not for the Occupy protest, said Stocker-Kelly, who said the uprising taught her how to cover contentious social movements and to listen to voices of everyday people.

It’s one more way the momentum forged one decade ago, which once echoed down the concrete canyons of Lower Manhattan, can still be heard today.