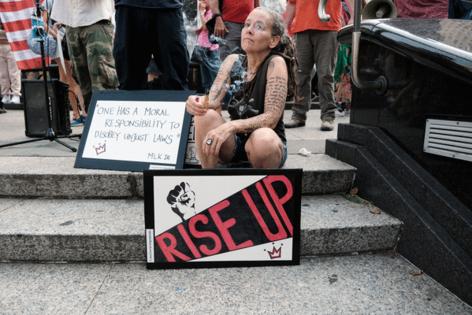 Whether you are religious believer or an atheist, it’s galling to realize that some people are feigning religious objections to COVID-19 vaccines to avoid compliance with mandates. And since the law requires that religious beliefs be “sincere,” it’s tempting to argue for strict policing of the legitimacy of requested objections.

On closer examination, however, the right course is actually for employers and government to defer to individuals’ claims of religious exemption, no matter how implausible they may seem. The principle of freedom of conscience means that the final judge of what’s in your conscience is, well, your conscience.

So a person willing to base an exemption request on religious belief should get the exemption, regardless of whether you or I might think the person has made up the religious motive as an after-the-fact way of avoiding vaccination.

Start with a perhaps surprising reality: Under the existing U.S. legal system, people who give religious reasons for their conduct are normally believed, no questions asked. Determining sincerity is difficult in practical terms; but that’s not all. Judges hate the idea of questioning people under oath about the basis or origin of their religious beliefs. It feels too much like the Inquisition.

As a result, litigation around religious exemptions to many laws is almost never focused on the question of sincerity. Instead, disputes tend to be about how far the authorities must reasonably go to accommodate the exemption claim, or whether the government has a compelling interest in denying a particular exemption.

And that’s the way it should be, no matter how extreme it may sound to defer to people’s mere assertion that they are motivated by conscience. For these purposes, the federal statutes that enable exemptions are not only legally binding, but morally correct.

The moral basis for religious freedom is the idea of the liberty of conscience, which motivated the framers of the First Amendment to the U.S. Constitution and remains compelling today. That’s the notion that human beings possess an inherent right to make their own decisions about ultimate questions of the kind addressed by religion. A famous modern formulation is that of U.S. Supreme Court Justice Anthony Kennedy, writing in the 1992 Casey v. Planned Parenthood case upholding the right to an abortion: “At the heart of liberty is the right to define one's own concept of existence, of the meaning of the universe, and of the mystery of human life.”

The core of the liberty of conscience is the idea that only I can decide what my conscience requires. It’s a spectacularly individualistic principle, one that a utilitarian who likes to add up costs and benefits for everyone might well question.

In the Middle Ages, the Catholic Church sometimes thought that it should be in charge of conscience. That didn’t go terribly well. At the Diet of Worms in 1521, the church told Martin Luther to recant his beliefs because they went against church teaching. He replied that he could not, because it was neither right nor safe to go against conscience. That exchange symbolizes the moment that liberty of conscience began to be a core Western philosophical value.

When it comes to my conscience, it doesn’t matter if I thought something different last year or last week or 30 seconds ago. What I believe right now is what matters.

It also doesn’t matter how I came to my belief. Although it is notoriously difficult to define conscience, one classic definition, which goes all the way back to St. Jerome, is that conscience is that scintilla or spark or gleam of the inner voice that tells me what’s right. The fact that I started with an instinct about what I must do, and only later developed or discovered religious language to justify that instinct, isn’t disqualifying. It’s what the word conscience has mostly meant throughout its history.

People who decide first that they don’t want to be vaccinated, and then search online for religious authorities who might back them up, aren’t thereby disqualified from legitimately claiming to be protected by the liberty of conscience. They are doing what many before them have done — and exactly what religious liberty is supposed to protect.

After all, what’s so special about religious belief that would make it uniquely deserving of legal protection? A deeply felt atheistic belief held in good conscience deserves the same protection as a deeply felt religious belief. That’s implicit in the idea of conscience, which need not be derived from God to be valid. In recognition of that moral truth, modern law protects even atheistic beliefs that play the role that religion plays in the life of the believer. A pacifist atheist was as legally entitled to conscientious objection from the military draft when the U.S. had one as a religiously motivated pacifist.

The upshot is that, if you think exemptions based on conscience are ever morally correct, then you should let people decide for themselves what they actually believe, not second-guess them. Only sincere beliefs must be respected. But sincerity is in the mind of the believer, not the eye of the beholder.

Noah Feldman is a Bloomberg Opinion columnist and host of the podcast “Deep Background.” He is a professor of law at Harvard University and was a clerk to U.S. Supreme Court Justice David Souter. His books include “The Three Lives of James Madison: Genius, Partisan, President.”