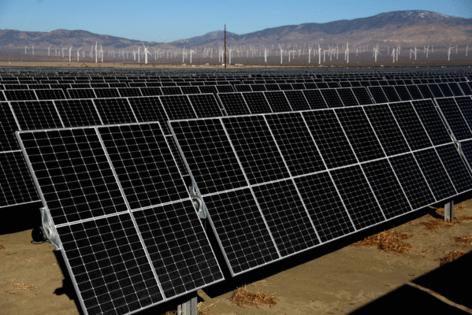 Climate change has become "everybody's crisis," President Joe Biden declared as he inspected Hurricane Ida damage last week. And in fact, according to a Washington Post analysis, just this summer nearly 1 out of 3 Americans experienced a weather disaster.

This alarming pattern will likely worsen unless aggressive climate change mitigation is soon implemented. Which is why the Biden administration is committed to decarbonizing the electrical grid, among other measures.

Doing so will require thinking big. Or really big, in the case of a U.S. Department of Energy "Solar Futures Study" released last week. The DOE contends it's possible to increase the role of solar power in producing electricity from the nearly 4% today to 44% by 2050.

Nearly half the nation's electricity from the sun? Sounds great, of course, even if what's possible isn't necessarily what's plausible.

Solar power is already hitting record installation rates, with 2020 seeing an increase of 15 gigawatts for a total of 76 produced in the U.S., according to the DOE report. But getting to the ambitious 44% goal would require doubling that installation rate annually between now and 2025 and then doubling it again annually from 2025-2030.

That would require huge investments from both the public and private sectors — up to $562 billion, according to the analysis. But the return in carbon emissions and improved health quality would result in savings of $1.1 trillion to $1.7 trillion, the report states.

Significant technological innovations also would be needed, particularly in storage capacity and transmission lines. That's especially critical because the percentage of vehicles and manufacturing processes switching to electricity is set to increase significantly as well, Daniel Cohan, an associate professor of civil and environmental engineering at Rice University, told an editorial writer.

Cohan is an advocate of solar energy, but said the goal of decarbonizing the grid is best approached by not targeting a specific percentage from a specific source, especially as energy technology continues to evolve.

"We shouldn't be aiming for a preordained percent of any one fuel, our aim should be to make electricity as clean, affordable and reliable as possible, and as soon as possible," Cohan said. "We know that solar and wind are going to play leading roles in that. But we don't know exactly what those percentages would be." Most studies in the sector, Cohan added, "show that a more affordable path to get to clean electricity would have more blended supply."

To its credit, the Biden administration hasn't taken the DOE study as a policy blueprint, but as an example of what's possible — at a time when it's impossible to ignore the existential threat any longer.

The study is "yet another affirmation that it is possible to get to net-zero electricity by 2050," Cohan said. "We need to be planning for it and building pretty soon. In terms of legislation, I think that should be the goal: Our aim is to have clean electricity, because clean electricity is the most essential step towards net zero for the entire economy."

What's most important about the study is what it represents: an administration committed to finding solutions.

Reflecting upon the significant role energy production plays in greenhouse gas emissions, Jessica Hellmann, director of the University of Minnesota's Institute on the Environment, told an editorial writer in an email exchange that, "To achieve our Paris [climate accord] commitments and avoid catastrophic levels of climate change we need to reduce emissions to zero by 2050." Accordingly, Hellmann added, "we have to transform our energy sources to achieve carbon-neutrality goals.

"It might be ambitious — and even difficult — to do that, but it's necessary."