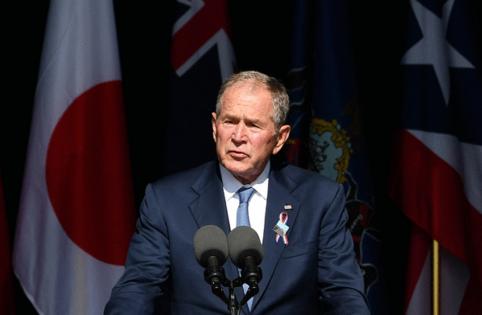 Americans of divergent political persuasions found common cause to unite around President George W. Bush after the Sept. 11, 2001, attacks because of the clear and present danger that al-Qaida posed to the nation. Political divisions began developing in the lead-up to the 2003 Iraq War, at which point Bush refused to budge on his justification for the invasion. Leaders of his party stood loyally behind him, even to the point of questioning the patriotism of Iraq War critics.

The divisions sown back then are growing wider and deeper today, and it’s those divisions — not al-Qaida — that now pose perhaps the greatest threat to the nation’s survival. To his credit, Bush recognizes these new dangers and has correctly called out those responsible. He chose the solemn occasion of the 20th anniversary of the 9/11 attacks to speak out against the domestic extremists hiding behind the banner of patriotism to undermine national unity. They are succeeding where al-Qaida failed.

Speaking in Shanksville, Pennsylvania, at the site where Flight 93 crashed after passengers overwhelmed 9/11 hijackers, Bush noted the heightened security measures that Americans have accepted as necessary to fend off future terrorist attacks. Then he shifted focus to warn of the new threat America faces. Though Bush didn’t name names, it was clear he was referring to the divisiveness cultivated during Donald Trump’s presidency that culminated in the Jan. 6 Capitol insurrection:

“And we have seen growing evidence that the dangers to our country can come not only across borders, but from violence that gathers within. There is little cultural overlap between violent extremists abroad and violent extremists at home. But in their disdain for pluralism, in their disregard for human life, in their determination to defile national symbols, they are children of the same foul spirit. And it is our continuing duty to confront them.”

It was particularly bold of Bush to speak so plainly on Saturday’s anniversary, a day of solemn remembrance. His remarks, however, stayed true to the cause of national unity.

“A malign force seems at work in our common life that turns every disagreement into an argument, and every argument into a clash of cultures. So much of our politics has become a naked appeal to anger, fear, and resentment. That leaves us worried about our nation and our future together,” he said.

It took courage for Bush to draw the linkage between the domestic extremists’ goals and those of al-Qaida, particularly regarding their mutual “disdain for pluralism” and willingness to defile national symbols.”

In the months after 9/11, the phrase “If you see something, say something” became the mantra of all who sought to protect America from those seeking to destroy the country. Bush clearly sees something and used this occasion to say something. If only his fellow Republican leaders shared his courage.