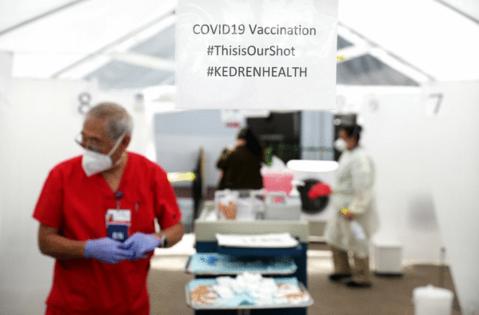 I realized this on Monday as I watched him, dressed in an impeccable blue suit, and scowling and pointing at no one in particular as he laid into the "right-wing echo chamber" and the millions of Americans who have yet to get vaccinated for COVID-19.

"It's a choice to live with this virus, and with all due respect, you don't have the choice to go out and drink and drive and put everybody else's lives at risk," he declared during a news conference in Alameda County. "That's the equivalent of this moment with the deadliness and efficiency of the delta [variant]. You're putting other people's, innocent people's lives at risk."

I wish I could summon such righteous rage — the same sort I've seen from so many vaccinated white people lately as infections and hospitalizations have increased, and as mask mandates have returned.

Alas, things are more complicated when you're Black.

As someone who got vaccinated as soon as I had the chance, I'm frustrated, too. But when talking to my unvaccinated relatives about COVID-19, I have no choice but to consider the systemic racism that has long pervaded this country, and how it has resulted in deep distrust of the health care system, government agencies and most institutions, including legit media organizations.

Newsom can simplistically blame conservative pundits for "profiteering off misinformation" and unvaccinated people for listening to them.

Likewise, Alabama Gov. Kay Ivey can apparently wash her hands of the millions of unvaccinated people in her state because they lack "common sense" and "are letting us down" — a statement that earned praise from another white person, President Joe Biden.

But such judgment is a luxury I don't have. I can't point to Fox News as the reason that my relatives won't get vaccinated, as I've heard many white liberals say of their estranged relatives in red states. What Tucker Carlson lies about every weeknight has no bearing on why millions of mostly left-leaning Black Americans — and roughly half of Black Californians — remain unvaccinated.

I also can't merely write off fearful Black people as lacking common sense when I know that their personal experience has taught them to be suspicious of authority. Not when I know that, decades after the Tuskegee syphilis study, Black Americans still don't receive medical care on par with white Americans. Disparities abound in everything from maternal death rates to the treatment of chronic pain.

Dr. Roberto Vargas, an assistant dean at Charles R. Drew University of Medicine and Science, put it this way.

"For those of us who are sensitive about blaming people who have suffered from oppression for their behavior or related outcomes, it's a really tough thing," he said. "Yes, there may be some behaviors that are going on in Black and brown communities that are putting us at greater risk. At the same time, there's a level of responsibility at a systemic or institutional level that's contributing to that disparity."

In other words, there's an inherent white privilege in white rage at the unvaccinated.

This is something Vargas has understood for months, working at vaccination clinics across South L.A. and having conversation after conversation with people of color uneasy about getting the jab.

I didn't truly understand it until last week, when I went to visit family and friends in Ohio. My time there was marked by vacillations of indignant rage and reluctant patience, but most of all, fear for the health of people I love very much.

It started the moment I walked in the door to my father's house. He was watching TV news and swearing at a Black man who was explaining why he hadn't been vaccinated and, despite the threat of the Delta variant, had no intention of doing so.

"These stupid mother—!" muttered my father, a lung cancer survivor in his 70s who got vaccinated as soon as he could swing it. "It just makes no goddamn sense. These idiots listening to all of these internet rumors."

I agreed, shaking my head.

But then we talked about all of the people we know who haven't been vaccinated, and how so many of them were scared, usually because of some past experience. That includes an uncle. Best I can tell, he's afraid of white doctors and the medical establishment, something about how they were at fault for my grandfather's death.

"It's sad," my dad admitted, "that he probably won't ever change his mind."

Another uncle — Jerry is what we call him — has been vaccinated. He, too, is a lung cancer survivor. But he is scheduled to have surgery in a few days to unclog an artery, and he confessed his unease about getting a COVID-19 test with a swab up the nose.

He'd heard that the swab could get stuck in your brain and cause brain fluid to seep out of your nose. My eyes widened. He swears his late wife had some sort of brain fluid issue and the doctors wouldn't listen.

I struggled to keep my voice even, as I explained that there was no danger in getting a COVID-19 test and the talk of brain fluid through the nose was a conspiracy theory. I told him I knew because I had just interviewed a doctor who mentioned it.

A few days after that conversation, I learned that my childhood friend and most of her family hadn't gotten vaccinated. We all had spent more than an hour in a crowded restaurant. There wasn't a mask in sight, even on the servers.

"I'm going to get it," my friend assured me. Her boyfriend's job gave him no choice, so they had decided to go together. Her sister, who works in health care, has no plans to do the same. She's unsure what the vaccine will do to her, and my scientific explanations — heck, my very presence as a Black vaccinated woman — didn't help.

My cousin also is refusing to roll up her sleeve. She is convinced that the media narrative has been slanted to eliminate any negative information about the side effects. My reminder that "I am the media" also didn't help.

Another friend told me I couldn't drive her car because I had been on a plane recently and she was scared that whatever I exhaled in her car would give her the delta variant. This was after we had been sitting together for about an hour, maskless at a restaurant.

After a few days, I just stopped talking about COVID-19 and vaccines.

I left Ohio angry, but also depressed and bewildered. I can understand the fear and distrust of institutions that has driven my family and friends to seek out fringe information. But other than a vaccine mandate, I have no clue what to do about it before it's too late.

Vargas, who has been hearing Black people in South L.A. spout the same misinformation for months, says the only solution is for more people to get involved. This isn't the time for the vaccinated to angrily write off the unvaccinated, even though that's already what's happening.

"What does help look like? Like volunteering at a vaccination site or writing a check. Or talking to people and helping them get access to a doctor or a [health care] provider," he said. "The things that we know make a difference to changing people's lives might just be talking to someone else who's been vaccinated. Help to foster that communication."

One more thing, especially here in Los Angeles: Let's not fall into the narrative that all of those who haven't been vaccinated are conservative Trump supporters who have been brainwashed by Fox News.

It's a convenient talking point for a governor facing a recall, but it won't solve our problem.