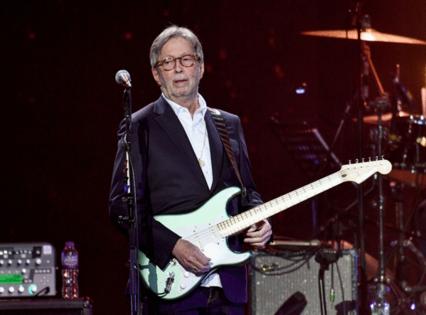 The music people adore when they’re young often crystallizes their identities and unlocks oceanic feelings. It’s easy to latch onto certain songs, become defensive about their brilliance and refuse to let go.

Clapton, who is 76, has been in the news this week — not for rock-goddery but his reckless anti-vax rhetoric. His dangerous stance on vaccines has forced yet another conversation about the importance of “separating the music from the man.”

Fans have started to argue again that Clapton was such a Michelangelo in music with songs such as “Layla,” “Cocaine” and “Wonderful Tonight” that his grave misconduct can never make them question his work.

Some seem further to have internalized the creed that “Clapton is God” — apparently without knowing that Clapton himself has suggested that the meme, which was spray-painted all over London in the mid-1960s, was invented by a Yardbirds promoter.

For these believers in Clapton’s divinity, you can criticize the man — and there is more than anti-vax politics to object to — but hands off the music.

This misses the point. In Clapton’s case, the music and the man are one and the same — arrogant performances of “iconoclasm” that appeal chiefly to young, self-doubting minds eager for outlaw heroes. The Clapton package hit the spot at a certain hormonal stage of life. But then you grow out of it, especially as both the music and persona curdle.

Throughout the pandemic, Clapton has joined in criticism of the COVID-19 lockdown, as if governments were just 1960s priggish parents grounding kids for smoking grass.

He played on an anti-lockdown track by fellow science-denier Van Morrison. Then he started citing nutjobs and YouTube videos as evidence of conspiracies around the pandemic.

But Clapton also chose to get vaccinated. (It’s almost as if he didn’t want to contract a deadly disease.)

After his second shot, he alleged that the vaccine left him with a 10-day flare-up of pain in his hands and feet, possibly — he implied — related to the peripheral neuropathy he suffers from. Neuropathy is the result of an injury to the nerves. It can be caused by alcoholism. Clapton has long admitted his alcoholic history.

On Wednesday, Clapton announced that he won’t play in venues that require audiences to show proof of vaccination. Clearly old Slowhand is willing to create superspreader events, secure in the knowledge the coronavirus is unlikely to infect him.

Here we go. Vaccinated celebrity-types discouraging vaccination for the masses. Worse: making vaccine hesitancy seem heroic, a revolt against tyranny. For art. And just as the delta variant delivers death around the world.

Nostalgia keeps Clapton the guitar hero from being dismissed as a public health hazard. He should have been pulled off his pedestal long ago.

Nearly from the start, Clapton revealed himself as racist, violent and now anti-science, and you can’t separate that from the “Clapton is God” package.

This is not to say that everyone who likes Clapton’s music shares his views. It’s to say that Clapton the delirious soloist has always been striking the same chords as Clapton the anti-vax preacher.

There are decades of vileness that have been overlooked or rationalized.

There was that time in 1968 that Clapton damned Jimi Hendrix in Rolling Stone, using a casual racist slur and citing vulgar racist nonsense as the source of Hendrix’s appeal as a sexual fetish object.

There was the time in 1976 that Clapton announced at a concert, again with racist slurs, that he wanted to “keep Britain white” and to deport all Black people.

And of course there’s the time in 1999 when Clapton told the London Sunday Times that fueled by drugs and alcohol he abused the model and photographer Pattie Boyd in the 1980s, when they were married. “I took sex with my wife by force and thought that was my entitlement,” he said.

Now Clapton, with his dangerous vaccine ideology, seems to be taking a life-or-death public health matter by force, and thinking it’s his entitlement.

In the Guardian in 2018, critic Neil Spencer praised Clapton’s music as “dazzling” and full of “caustic brilliance,” cautioning against putting too much stock in his “poor behaviour and assorted addictions.”

“One must trust the art, not the artist,” Spencer wrote.

Dazzling and brilliant are generic words of praise, and clearly in the ears of the beholder. But “caustic” means corrosive. If Clapton’s music is corrosive, certainly so are his actions and ideologies. They’re all of a piece.

With Clapton, it seems time to trust both the art and the artist — and both seem to be begging (on their knees) to enter retirement.