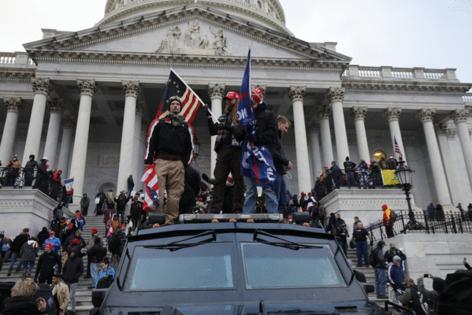 Whatever one may think of Donald Trump or the circumstances of last year’s election or even the bitterness of this nation’s partisan divide, it ought to be easy to condemn the events of Jan. 6 and to support a broad inquiry into what happened and how to prevent it from happening again. Sadly, Republicans in Congress can’t seem to recognize what should be an inescapable conclusion.

First, they opposed an independent commission modeled after the panel that looked into the events of 9/11. Next, House Minority Leader Kevin McCarthy attempted to undermine House Speaker Nancy Pelosi’s backup plan, a 13-member bipartisan select committee charged with the same duties, by nominating five members who were, to put it mildly, mostly right-wing flamethrowers loyal to the former president. On Wednesday, Speaker Pelosi rejected the two worst, Reps. Jim Jordan and Jim Banks, leaving Reps. Rodney Davis, Kelly Armstrong and Troy E. Nehls. McCarthy then withdrew all five nominees and vowed not to cooperate with a “sham process” unless all five are seated.

It remains to be seen whether some reasonable standards of decency and intellectual honesty can be restored to what has, perhaps predictably, descended quickly into partisan squabbling. It’s not as if House Republicans have shown a lot of interest in the cause of justice prior to Wednesday. “Make no mistake, Nancy Pelosi created this committee solely to malign conservatives and justify the left’s authoritarian agenda,” Banks, who would have been the group’s ranking member, previously posted on Twitter. And did we mention that three of the five initial nominees voted to overturn the 2020 presidential election results after the insurrection? No doubt the first round of choices met with approval from Trump, with whom McCarthy just happened to meet at his golf club in Bedminster, New Jersey, prior to announcing their appointment.

Some Democrats might well be focused on political opportunity, too. And if that’s all their intent with this investigation, then shame on them. So far, at least, Speaker Pelosi and many others of her party appear legitimately interested in exploring the terrible events of that day. A mob of Trump supporters seeking to overturn the results of the election — called into action by Trump himself — stormed the U.S. Capitol, disrupting a joint session of Congress as it certified the election in favor of Joe Biden and Kamala Harris. It was not “rowdy tourism” or “free speech in action” or any of the various other bogus explanations that have been offered by those who seek to avoid the ugly truth. The mob occupied and vandalized one of this country’s most sacred spaces. Five people were killed as a direct result. How could all Americans not be absolutely horrified by this criminal conduct?

That the so-called party of law and order can so easily overlook the death of Capitol Police officer Brian Sicknick and the injuries sustained by at least 137 fellow officers represents a jaw-dropping level of hypocrisy. Nearly as shameful are the consistent attempts at blame-shifting, by either pointing to violence that erupted in some cities in reaction to the death of George Floyd at the hands of police or focusing on the lack of adequate preparations to thwart an attack on the building. While the latter may prove useful (much like broader post-9/11 discussions of counter-terrorism), how efforts to subvert democracy in January are connected to concerns about police misconduct or race relations (with the unrest in Baltimore after the death of Freddie Gray six years ago sometimes thrown into the mix) is a mystery. Last we looked, West Baltimore is not the U.S. Capitol.

In the words of U.S. District Court Judge Royce C. Lamberth, those who continue to try to “rewrite history” regarding the events of Jan. 6 are spouting “utter nonsense.” The parade of hundreds of insurrection participants before Judge Lamberth and others, along with the release of videos from that day, have been helpful in keeping Americans grounded in reality. Not all of them, obviously, but perhaps enough. How much better — how much stronger our nation and the prospects for continuing our democracy — if Republicans would take up the cause of truth as so many did after 9/11? Would it serve Donald Trump’s personal interests? Probably not. But it would surely help the country heal and move on.

And who knows? The statesmanship and patriotism they would need to muster to perform this task may well be rewarded in the next election. Voters like values. In 1974 when Richard Nixon resigned from office in disgrace after Watergate, Republicans did not come rushing to his side to claim the break-in and cover-up never happened. That honorable choice was good for them, good for their party, good for their country. Actively seeking to derail this inquiry as Mr. McCarthy and his suspect on-again, off-again appointees appear anxious to do, falls woefully short of that standard.

Baltimore Sun editorial writers offer opinions and analysis on news and issues relevant to readers. They operate separately from the newsroom.