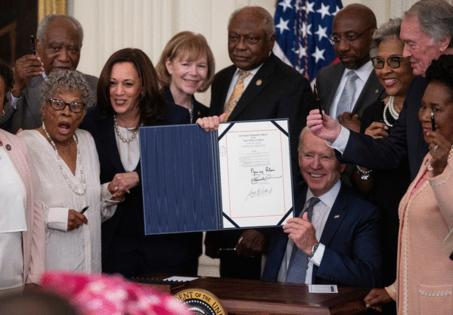 Maybe it was the mostly white schools I attended, where lessons on Black history started with slave ships, skipped a few centuries and ended with the assassination of the Rev. Martin Luther King Jr. Or maybe — and this seems most likely, based on an informal poll of friends and family — it's because it wasn't really celebrated in northeast Ohio.

It was my professor of Black history who introduced me to Juneteenth. Appalled that most of her Black students knew nothing of the holiday, she decided to hold a mock celebration in early June, a week or so before most of us graduated.

She brought in red food and drinks to share, symbolizing the blood of our ancestors. The strawberry soda, the red beans and red velvet cake.

We talked about what it must have felt like for the enslaved Black people of Galveston, Texas, to learn from Union soldiers on June 19, 1865, that they were free — months after the Confederacy surrendered and years after the Emancipation Proclamation. We laughed and we danced. And we pondered our collective liberation.

Since then, Juneteenth has always felt like it was ours — a holiday for Black people to celebrate the resiliency of Black people. One of the last corners of Black life untouched by mass consumerism and cultural appropriation and erasure.

Now, though, Juneteenth is open to all Americans, and that has me worried.

On Thursday, during a crowded White House ceremony, President Joe Biden signed into law a bill that makes June 19 a federal holiday — the first since Martin Luther King Jr. Day was created in 1983.

I get the fanfare. Black activists have been lobbying Congress for such recognition for decades.

As Vice President Kamala Harris said during the ceremony, having Juneteenth as a federal holiday is important because it presents an opportunity for Americans to "stop and take stock" of our history, and hopefully to learn from it.

Biden offered similar sentiments, adding that "great nations don't ignore the most painful moments" of the past, "they embrace them."

It's the embracing that worries me.

America has a way of squeezing the meaning out of holidays until we all forget why they were created in the first place. It corporatizes holidays with insipid slogans, commemorative products and unrelated sales events.

We don't need Macy's one-day sales on refrigerators and mattresses. Or discounts on Toyota sedans and Ford pickup trucks. I can hear the commercials now: "Deals so good, you'll think you're getting away free!"

We don't need brands capitalizing on Juneteenth hashtags on social media, vowing to donate a portion of any sales on June 19 to this charity or that charity in support of Black lives. But I'm not optimistic.

So far, most companies have shown some level of restraint for Juneteenth. Apple, Verizon, Peloton, Nike and Zillow are giving their employees the day off, for instance. Other companies are treating it as a day of service, urging employees to volunteer or engage some form of activism.

But then there's Amazon. Along with Procter & Gamble and Crown Royal, the corporate behemoth is sponsoring the inaugural Juneteenth Unityfest.

The series of musical performances and speeches from "civic leaders and influencers" will be livestreamed Saturday. Organizers note that it will be "a national platform for a coalition of charitable and grassroots organizations to gain much deserved attention and support for their work in advancing national unity."

Meanwhile, General Motors, Lyft, Forbes, DoorDash, Carhartt and the Obama Foundation are among the sponsors of the Juneteenth Foundation Freedom Festival. This two-day series of "reflection panels" and receptions with "members of Congress, celebrities, CEOs and community leaders" will end Saturday night with a Freedom Concert.

And so it begins. I doubt this is where it ends.

As America becomes more diverse in the coming decades, the temptation will increase for corporations do more on Juneteenth — as a way not only to make money, but to build cachet for their brands.

We won't talk about how many companies continue to underpay and undervalue their Black employees.

Equity? They're all about it. Black lives? Of course, they matter. Happy Juneteenth!

For parallels, all one has to do is look at the evolution of Pride. What began as a riot waged by a bunch of transgender women fed up with New York City police harassing them has become, in most cities, a massive party. Parades are now dominated by rainbow-drenched floats built by deep-pocketed companies, such as Twitter and Facebook.

There's a fine line between celebration and appropriation. In the end, I suspect it will be up to Black people to hold on to the true meaning of Juneteenth, so its power isn't commoditized, diluted and sold off, and its history isn't lost, misconstrued and ultimately forgotten.

I've only celebrated Juneteenth a handful of times since college. But I've come to think of the holiday almost like a family reunion. I'll always have a standing invitation — one that I plan to use this year.

"We have come far and we have far to go," Harris said Thursday. "But today is a day of celebration. It is not only a day of pride. It is also a day for us to reaffirm and rededicate ourselves to action. And with that, I say, happy Juneteenth."

(Erika D. Smith is a columnist for the Los Angeles Times.)