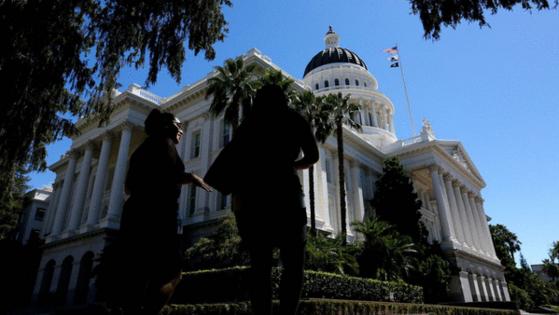 But it's also much more. And it doesn't mean the budget should cynically be dismissed as a sham, the way it is in much of the media. It's very real with many significant elements — like them or not.

The payroll protection system was set up by California voters in 2010 when they approved a ballot initiative to lower the required legislative vote for a budget to a simple majority from a gridlock-inducing two-thirds.

In order to attract voters for the controversial initiative, labor union backers inserted a penalty. If lawmakers didn't pass a budget by the June 15 constitutional deadline, they'd lose their pay for each day the bill was late.

It worked — the proposition passed. And every year since the Legislature has met its deadline, unlike in most years before when there was chaos. Lawmakers are human. They want to be paid.

Then-Gov. Jerry Brown, beginning his second tenure as chief executive during the first year of the deadline penalty, tried to stick it to the Legislature. He didn't like the lawmakers' budget, flexed his muscle for show and vetoed the spending plan. Then-Controller John Chiang announced he'd cut off the lawmakers' pay. And they quickly reached an agreement with Brown.

But the Legislature sued and won in court. Whether the governor liked the budget or not, it had been passed on time, the court ruled. So, budget veto threats and pay cutoffs were no longer part of the governor's tool kit.

It also meant, however, that sticky spending details weren't always settled before the budget was passed. It gradually became merely a spending framework. The nitty-gritty follows in so-called "trailer bills" up until the July 1 start of the new fiscal year. Sometimes they aren't even settled until deep into summer.

But that doesn't render the spending framework irrelevant — or "a fake budget," as veteran Republican Sen. Jim Nielsen of Red Bluff declared during a quickie committee hearing Monday shortly before the bill was passed by the full Senate on a party-line vote.

For starters, it authorizes the spending of $264 billion in tax dollars — a 31% increase over the budget Gov. Gavin Newsom signed one year ago. Or, looked at another way: roughly $6,600 for every man, woman and child in California.

It provides a record $96 billion in spending on K-12 schools and community colleges — amounting to $21,000 per K-12 student, undreamed of a few years ago.

Small businesses are in line for $1.5 billion worth of pandemic grants.

Older immigrants living in the country illegally will be entitled to health care under the state's Medi-Cal program for the poor. Young people up to age 26 already are eligible. The Legislature's budget brings in others age 50 and up. Newsom wanted only seniors 60 and over. That's still to be negotiated.

Impoverished aged, blind and disabled people will have benefits restored that were chopped during the Great Recession. They'd get more money under the Legislature's plan than the governor's.

Transitional kindergarten will kick in — a little faster under the Legislature's proposal than what the governor proposed.

There's $8.5 billion in the Legislature's budget for homelessness programs over the next two years. Local governments will get an additional $1 billion.

Broadband expansion — to bring high-speed internet to virtually everyone in California — will get $7 billion. But details are still to be worked out. Newsom wants to do it faster than the Legislature.

The only real budget beef between Newsom and the Legislature is over timing. They're both going in the same direction. Democratic lawmakers mostly just want to get there faster.

The state treasury is overflowing with a $38-billion windfall of unrestricted money that can be spent any way the ruling Democrats desire.

The legislators' view is that since the money is here, spend it on permanent improvements they've always wanted.

Newsom is trying to play it safe, fearful of the future's inevitable economic downturn. For the $38 billion discretionary surplus, he proposed spending 90% on one-time projects and only 10% on continuing programs.

"Our overarching concern is a level of spending we don't think can be sustained overall," says H.D. Palmer, spokesman for the state finance department. "There could be a return of deficits in future years.

"One thing history has taught us is that it's very tough to pull back ongoing spending when revenue suddenly drops off."

The root of the difference between the governor and the Legislature — besides their philosophies regarding how safe to play it — is that they're using different revenue expectations. Newsom relies on his finance department, which is projecting lower future tax receipts than the Legislative Analyst's Office.

But these are typical budget games that have always existed.

Yes, legislators will be paid.

And so will state vendors. In the bad old days, they often were paid with IOUs when Sacramento ran out of money as summer budget squabbles dragged on. And on.

We're all much better off now.