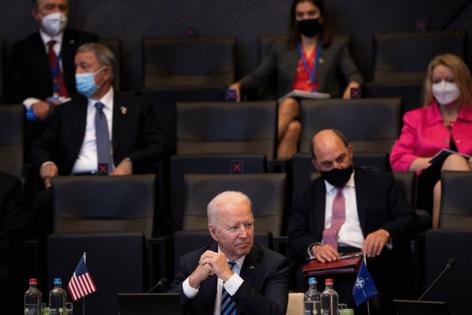 Over the past 20 years, China has absorbed millions of U.S. jobs. It has stolen billions of dollars' worth of intellectual property from American companies and made itself critical to global supply chains, at times with the help of U.S. investors.

This must stop. The Chinese regime is an authoritarian, powerful, anti-democratic superpower that is rapidly gaining on the U.S. in terms of market size and political influence. The shadow and threat have been growing for decades. And while the U.S. has been slow to respond and push back, it is now doing so with coordination and bipartisan urgency at the highest levels of government.

In this great race of superpowers, the U.S. must take China head-on. Former President Donald Trump began ramping up pressure on the Chinese, and now President Joe Biden is working toward a sweeping set of policy initiatives to add additional pressure, a mixture of foreign sanctions and domestic incentives.

The federal government is leading the charge, and now is the time for buy-in from the private sector. Where possible, corporations should work to wean off their dependence on Chinese labor and goods and invest at home or with allies. Legislation is percolating that will push some companies to do just that. The more that do so voluntarily, the better.

In early June, Biden signed an executive order expanding a Trump-era prohibition on Americans investing in Chinese companies with links to China's military, increasing the number of blacklisted companies to 59. Simultaneously, the U.S. Senate passed a bill intended to increase domestic semiconductor production and other technological endeavors to help this country remain competitive on the world technology stage.

Biden also has pledged to use federal trade protections as needed to boost U.S. manufacturing of key products to reduce its dependency on exports from China and to shore up its supply chains.

Keeping up trade pressure and retooling domestic supply chains should bring back some lost jobs and reduce U.S. dependency on Chinese manufacturers. The Senate also recently passed legislation that will require the president to sanction foreign operators engaged in theft of intellectual property, providing an avenue for discouraging such practices by China. Governmental incentivizing of manufacturing, especially that of products primarily or only made in China, will help the U.S. compete more directly with the country.

America need not demonize China, but it must continue to ramp up its competitive pressure to retain its global status and influence. That will require buy-in from the public and private sectors alike as this country works to increase its economic lead.