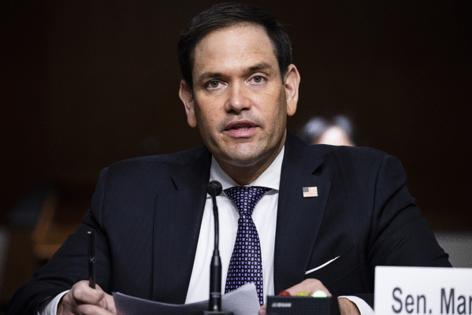 And he did it during a pandemic that has disproportionately harmed minorities. Talk about tone deaf — and hurtful.

"The American Medical Association has fallen victim to the pandemic of crazy nonsense," he wrote, as he retweeted an article by the AMA about how the organization plans to address racism and social justice in medicine.

Of course, it's all part of the culture wars and his attempt to recast himself from unsuccessful presidential candidate to warrior against the "woke" as he faces a potentially competitive reelection contest next year. Apparently, he's even trying to create a 2.0 version of Republicans' attacks on Democrats as socialists — which succeeded among many voters in Miami-Dade County — except for 2024 he's going after Communist China, with his campaign sending targeted emails to specific anti-China voters, according to Axios.

But the idea of inequities in medicine is not some wild — or even new — idea, despite Rubio's flippant Twitter rejection. Inequities have dogged the medical community for years and became even more apparent in the COVID-19 pandemic, when more Black, Hispanic and Asian people had higher rates of infection, hospitalization and death than white people.

Access to health care, good insurance, transportation to the doctor, underlying conditions, lower socioeconomic status — all of these things play a role in who gets medical attention and who has delayed care or none at all.

And that's true not just during pandemic times. For years, maternal mortality rates for Black women have been higher than for whites — two to three times higher, according to the U.S. Centers for Disease Control and Prevention. Congress, of which Rubio is a part, has even taken up the issue as part of a package of legislation nicknamed the "Momnibus."

Of course, expanding Medicaid under the Affordable Care Act might help with that, with one study finding that states with expanded Medicaid eligibility had lower maternal mortality rates compared to non-expansion states. But Florida's GOP-led government has repeatedly refused to expand Medicaid.

Florida's own Republican House Speaker, Chris Sprowls, issued a statement last week in an Orlando Sentinel story about Medicaid saying he didn't want to expand it but that he "expressed a strong desire to address disparities in maternal health care for low-income women." That'll be Black and brown women he's talking about.

And yet, despite all of that, Rubio couldn't resist the urge to try to score cheap political points on social media with a quip about a deadly serious topic: inequities in medical care. Is that really the kind of senator we want?