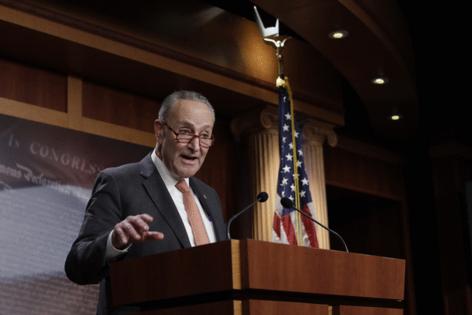 Just because the chronically dishonest Donald Trump spent four solid years cheaply vilifying China doesn’t mean there aren’t a wide range of legitimate and urgent complaints about how the Asian economic giant is gaming the global economic system to gain unfair advantages. Which is why Majority Leader Chuck Schumer’s landmark legislation, which won Republican and Democratic Senate votes, deserves cheers — and passage in the House.

The U.S. Innovation and Competition Act aims to reinvigorate American research and development and manufacturing capabilities not with Trumpian bombast, but by making smart investments that’ll pay dividends in years to come. In the offing, it will simultaneously crack down on some of Beijing’s most serious abuses, which the World Trade Organization and others talk about combating but rarely do squat to stop. The best offense is a good defense, and vice versa.

Among the $200 billion bill’s sweeping provisions: The Commerce Department will get $50 billion to boost domestic semiconductor production — a critical need given global microchip shortages — and another $10 billion to create regional tech hubs.

The $80 billion for the National Science Foundation will underwrite basic research in robotics, artificial intelligence, biotechnology quantum computing, giving the U.S. a fighting chance of winning races China is now often ahead in and seeding future growth of companies and jobs. Federally funded infrastructure projects will have to use domestic producers for many of their products.

And just as important, the State Department will be required to out state-owned Chinese enterprises that are engaging in intellectual property theft and forced technology transfers, exposing chronic cheating that costs the U.S. hundreds of billions annually but that we’re often now powerless to fight. The president will be directed to sanction offenders.

It’s easy to vilify China and use it as an excuse for all of America’s economic woes. It’s harder and far more important to get our act together and push back, with countermeasures and our own well-thought-out battle plan. The legislation can’t become law soon enough.

After a year of uncertainty and financial upheaval, Americans have become more thrifty.

Most adult citizens received more than a thousand dollars of stimulus money from the federal government during the COVID-19 pandemic....Read More

After President Joe Biden's inauguration on Jan. 20, he quickly scrapped many of the callous immigration policies of his predecessor, Donald Trump. His decision to not turn away asylum-seeking minors was widely hailed by ...Read More

ATLANTA — Marjorie Taylor Greene has been called on to apologize many times before.

For promoting the dangerous QAnon conspiracy theory; for harassing a school shooting victim; for statements so racist, anti-Semitic and...Read More