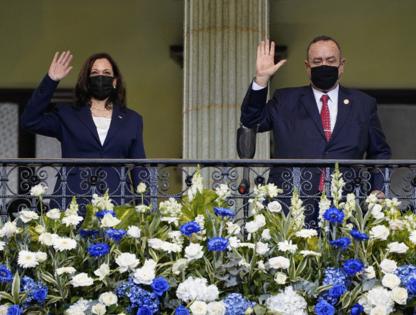 After President Joe Biden's inauguration on Jan. 20, he quickly scrapped many of the callous immigration policies of his predecessor, Donald Trump. His decision to not turn away asylum-seeking minors was widely hailed by humanitarian groups and led to young migrants being better treated. The Biden administration's efforts to make legal immigration more straightforward are also welcome.

But the administration has also sent contrary signals. It has refused to suspend a Trump policy known as Title 42 adopted in March 2020 that allows border agents to immediately expel migrant families caught crossing the border on the grounds that they were pandemic health risks. And Monday, Vice President Kamala Harris touched off a firestorm during a news conference in Guatemala with that nation's president, Alejandro Giammattei, in which she warned potential migrants to the U.S.: "Do not come. Do not come. ... You will be turned back."

The most generous way to interpret Harris' comments is as a blunt way to counter the false Fox News narrative that the Biden White House has embraced "open borders." But doing so in a way that suggests ambivalence about the rights of asylum-seekers is not a good look. Especially given how much Biden and Harris have criticized Trump over immigration, they both need to be surefooted, thoughtful and clear in their border rhetoric as well as their policies — or they will continue to face criticism from Democrats as well as Republicans.

ATLANTA — Marjorie Taylor Greene has been called on to apologize many times before.

For promoting the dangerous QAnon conspiracy theory; for harassing a school shooting victim; for statements so racist, anti-Semitic and...Read More

Last December, Oregon lawmaker Mike Nearman was meeting with activists unhappy with the state's pandemic lockdown. He shared their sentiments and thought he'd do something to show solidarity. So he presented them with a ...Read More

On the eve of President Joe Biden’s summit with Vladimir Putin, the Russian president once again reminded the world why most Western leaders don’t trust a word he says. In an interview with NBC, Putin deployed his ...Read More