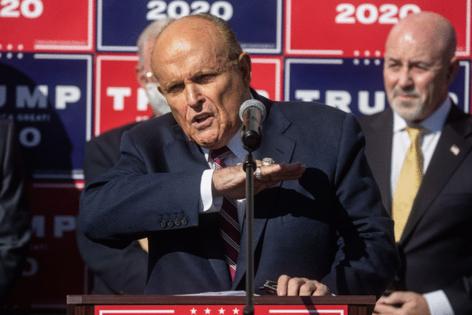 Just when it was starting to feel after 100 days that cable news and social media were properly focused on the potentially culture-changing actions of President Joe Biden, the past presidency of Donald Trump came roaring back on-screen.

There were images and endless analysis of law enforcement agents raiding the New York apartment of Rudy Giuliani, former mayor of New York and onetime personal attorney for Trump. There was Trump on Fox Business saying of the government action, “it’s, like, so unfair.” And there was Michael Cohen, another onetime personal attorney of Trump whose New York apartment was also raided by government officials, saying on MSNBC how much trouble he thought Giuliani was in for.

And then came Michael Fanone, an officer in the Metropolitan Police Department of the District of Columbia, who suffered a heart attack and concussion as he fought back against members of the Trump-incited mob that attacked the Capitol on Jan. 6. Fanone, who was shocked by a stun gun and beaten with a flagpole on the steps of the Capitol, said how “difficult” it has been to hear some politicians trying to downplay the violence. In an interview with CNN’s Don Lemon, the police officer cited the language of Trump who claimed the rioters were “hugging and kissing” police, a blatant misrepresentation of an event that left five people dead and dozens of law enforcement officers injured.

“It’s been very difficult seeing elected officials and other individuals kind of whitewash the events of that day or downplay what happened,” Fanone told Lemon. “Some of the terminology that was used, like ‘hugs and kisses’ and ‘very fine people,’ is very different from what I experienced and what my co-workers experienced on the 6th.”

Biden himself put Jan. 6 back on the social media burner when he said in his address to a joint session of Congress last week that the Capitol siege was “the worst attack on our democracy since the Civil War.”

I was initially dismayed by how much screen time and discussion the Trump era was getting over the weekend. I felt the amount of time spent revisiting Trump-induced chaos was especially problematic given all the major initiatives being generated by Biden’s administration. I also welcomed the relative media clam and normalcy Biden was bringing to the presidency. My thinking at first: Let’s forget about one of the most pinball crazy presidencies in American history and focus on the goals and accomplishments of what might be one of the most transformative since Lyndon Johnson’s or Franklin Roosevelt’s. Too many urgent decisions need to be made if we are going to come out of this moment of crisis.

But I was wrong. That assessment was based too much on my visceral reaction to Trump and the damage he has done to the nation and not enough on a thoughtful consideration of the role of the media in writing early drafts of history.

As much as we and many members of the various audiences we serve might want to turn the page on Trump’s presidency and move on with Biden’s agenda, we must never forget what happened the last four years. That’s a major part of our job, writing the first drafts of history.

And it is especially important when it comes to Trump and many of those with whom he has surrounded himself given their lack of respect for truth and propensity for lies. Besides Giuliani, I am also thinking here of politicians like Sen. Ron Johnson, a Republican from Wisconsin, who has steadfastly tried to rewrite the narrative of the insurrection.

He has disputed the attack being called an armed insurrection and said he “never felt threatened” because the protesters were in the main “people that love this country, that truly respect law enforcement, would never do anything to break a law.”

He then added racism to his revisionism and denialism saying, “Now, had the tables been turned … and President Donald Trump won the election and those were tens of thousands of Black Lives Matter and antifa protesters, I might have been a little concerned.”

As much as I would like to never see this gang of revisers, liars and deniers on my screens or have to write about them again, we in the media have to remember and remind our audiences what they said and did. This is more important than ever in post-truth America.