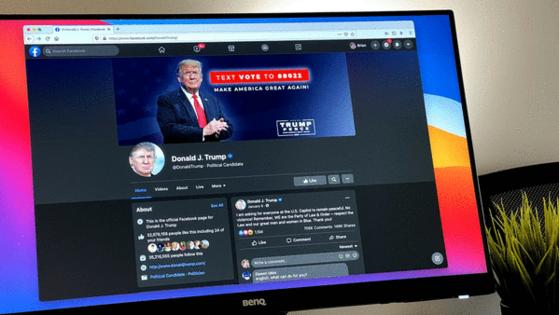 Perhaps blind to the irony, former President Donald Trump took to the newly created news feed on his website Wednesday to blast Facebook, Twitter and Google for muzzling him.

"Free Speech has been taken away from the President of the United States because the Radical Left Lunatics are afraid of the truth, but the truth will come out anyway," Trump declared shortly after Facebook's Oversight Board upheld the company's decision to suspend Trump's account.

With that, Trump showed once again that he hasn't lost his ability to say whatever he pleases to the world online. He just can't use Facebook's megaphone to do it, at least not for the time being.

Facebook booted Trump indefinitely, and Twitter kicked him out permanently, after Trump issued two inflammatory responses to the Jan. 6 riots at the U.S. Capitol. Facebook then asked its Oversight Board — a group of 20 academics, human rights advocates and other notables from around the world — to review its decision and to make suggestions about when political leaders should have their accounts frozen.

To the dismay of some critics, the board didn't call for Trump to be permanently expelled or for Facebook to address the algorithms, ad-targeting tools and other features of its platform that enabled the former president to feed his followers a corrosive diet of misinformation and conspiracy theories about the 2020 election. The board's ruling did, however, highlight some other changes the social network badly needs to make, such as applying its rules consistently and equally to all users and providing much more transparency about its decisions. For starters, we think it should abandon its bizarre practice of giving politicians free rein to lie to Facebook users and engage in other bad behavior that might somehow be considered "newsworthy."

Per the ruling, Facebook will have to decide within six months whether to reinstate Trump. In the meantime, he and other Republicans will no doubt continue pressuring Facebook to lift the ban, one of the many offenses they believe Big Tech companies are committing against the free speech rights of the GOP. To that end, the Republican-controlled state Legislature in Florida recently passed an absurd bill that would fine social media networks up to $250,000 a day if they "deplatform" any political candidate, regardless of how flagrantly such a person might violate the network's rules.

Like many of Trump's allies, the bill argues that the internet has become the 21st century public square, and everyone should have access to it. But Facebook is practically the opposite of an open forum for information broadly shared. As Jack Lerner, clinical professor of law at the University of California, Irvine, noted, its algorithms promote inflammatory material and suppress traditional sources of information, providing a "funhouse mirror" view of how people are thinking and feeling.

Beyond that, Facebook has its own First Amendment rights, like every other platform online. It cannot be forced to carry speech that violates its rules, or even that it merely disagrees with, as long as it doesn't discriminate against anyone protected by U.S. civil rights laws. Politicians aren't a protected class, and Republicans should stop demanding to be treated like one. Trump can build his own platform — and, in fact, he has.