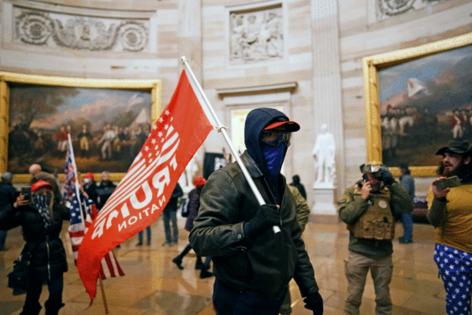 Much of America has moved on, but more than 100 days after he left the Oval Office, the specter of Donald Trump hasn't gone away. That was plain with two new developments on Wednesday.

In the first, Facebook's Oversight Board announced it supported Facebook CEO Mark Zuckerberg's decision to ban Trump from using Facebook and Instagram after the then-president incited his supporters to attack the U.S. Capitol on Jan. 6 to stop Congress' certification of Joe Biden's election. The Oversight Board's announcement was coupled with an admonition to the social media giant that indefinite suspensions such as the one Trump faces aren't actually allowed by Facebook's own policies. In turn, Facebook agreed with the board's request that it "review this matter to determine and justify a proportionate response that is consistent with the rules that are applied to other users of its platform."

The news pleased few. Those who hold Trump in contempt lamented the likelihood he would one day return to Facebook. Those who think social media networks have a partisan liberal agenda lamented the fact Trump's suspension was upheld. Moreover, the decision did nothing to allay the concerns of those from across the political spectrum about private companies having such sway over the world's most popular and powerful communication tools.

The San Diego Union-Tribune Editorial Board thinks both of the Oversight Board's main conclusions were correct. Yes, even presidents should be suspended if they encourage violence that leads directly to a deadly riot. And yes, the standards under which such decisions are made need to be transparent or else they will only add to the anger that suffuses American politics. Facebook needs clear policies, and a commitment to follow them.

The Trumpism driving the second big news item of the day, alas, was more clearly and painfully ominous. A day after House Minority Leader Kevin McCarthy, R-Calif., was heard trashing Rep. Liz Cheney, R-Wyo., for refusing to stay silent about Trump's continued lies about the election being "stolen," there were several reports that a vote could be held within days to remove Cheney from her role as the No. 3 leader in the House GOP.

But lest anyone forget, none other than McCarthy himself was criticizing Trump's actions soon after the Capitol riot. On the floor of the House, McCarthy said: "The president bears responsibility for Wednesday's attack on Congress by mob rioters. He should have immediately denounced the mob when he saw what was unfolding. These facts require immediate action by President Trump to accept his share of responsibility."

This was an appropriate, constructive and thoughtful response by one of the most powerful Republicans to the outrageous actions of the most powerful. McCarthy's subsequent support of Cheney helped her easily survive a Feb. 3 vote to oust her from leadership for the supposed sin of voting to impeach Trump for his role in the Capitol riot.

Then in an April 25 appearance on Fox News, McCarthy absolved Trump and tried to rewrite the history of Jan. 6, essentially acknowledging that to be a Republican politician, one has to promote the ex-president and an alternate reality. And in Utah this past weekend, the state GOP voted 711-798, failing all too narrowly to censure Sen. Mitt Romney for his votes to impeach Trump. The attacks on Republicans who voted their conscience and who continue to criticize Trump's big lie are incredible.

Cheney grasps the GOP is at a pivotal moment. "Our children are watching," she wrote in a recent essay in The Washington Post. "We must be brave enough to defend the basic principles that underpin and protect our freedom and our democratic process. I am committed to doing that, no matter what the short-term political consequences might be."

As Cheney wrote, the GOP is at a turning point in its history. So is the nation. Forward or backward.