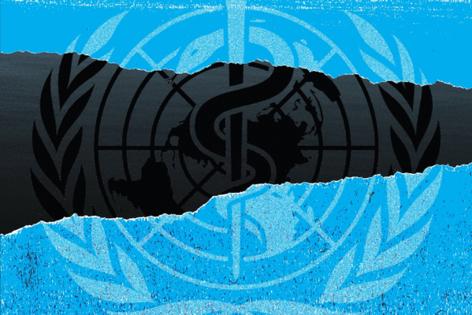 Only a handful of places — including Taiwan, Vietnam and New Zealand — acted in time to contain the coronavirus last year, causing the world to spend trillions of dollars fighting an infection that has led to the deaths of more than 3 million people so far. The World Health Organization shoulders some of the blame. At the least, it should have declared COVID-19 a pandemic weeks sooner than March 11, 2020, which would have underlined the urgency of a global response.

The organization’s failures point up the need to strengthen it. The WHO’s potential was demonstrated by the successes it did have as the world tried to corral the coronavirus. It helped coordinate an incredibly rapid global-learning process around the nature of the virus, testing, treatments and developing vaccines. And it would have accomplished more if it had had greater power to investigate outbreaks, greater resources that a more robust budget could pay for, and a greater ability to support outbreak response and vaccine development.

If we want to prevent the next pandemic, we will need a more powerful WHO.

The WHO exists to improve health outcomes across its 194 member countries. It has particular responsibilities regarding infectious disease — overseeing legally binding international health regulations covering monitoring as well as reporting and responding to outbreaks. And it is in every country’s self-interest to see a stronger WHO, because pandemic control is far more effective and less destructive the closer it occurs to the outbreak.

The best global response to a potential pandemic is to prevent an outbreak in the first place. That involves better sanitation and protection in factory farms, live animal markets, hospitals and laboratories. The second best is monitoring and control that stop an outbreak at the source — locking down the province or city where the first cases emerge. After that comes an attempt to rapidly contain the infection by tracking, testing and isolating victims and their contacts. Only after all those approaches have failed should we resort to mass social distancing, mask mandates and stay-at-home orders.

The first three approaches, the ones that avoid massive loss of life and economic damage, require global cooperation. Outbreaks can occur anywhere, so we need the sanitation, monitoring, control, testing and isolation capacity to work the world over. And we all suffer when these systems fail — when the coronavirus wasn’t originally controlled in Wuhan, China, when it spread through Europe and the U.S. before testing regimes were in place, and when variants emerged in countries where the virus was raging out of control, such as the United Kingdom, Brazil and South Africa.

Long before COVID-19, it was clear the World Health Organization needed reform if it was going to achieve the required level of cooperation needed to control pandemics. An international panel the WHO set up after the 2014 West Africa Ebola crisis called for member countries to give the organization more power and money, but a May 2019 internal audit suggested little had been done.

The WHO still has no legal power to enforce the international health regulations. One reason for the organization’s delay in declaring COVID-19 a pandemic was how long it took to get reliable information from China about the outbreak. The WHO needs to be given the authority and resources by its member countries so it can stand up to the most powerful of them and provide support to smaller, poorer member states.

But the WHO’s core budget has been on the decline since the 1980s. Four of every five dollars of its funding comes from voluntary contributions, and its annual budget of $2.4 billion is but a third of the $7 billion budget of the U.S. Centers for Disease Control and Prevention. The WHO’s health emergencies program, created to lead response to outbreaks, is chronically underfunded — a third of the jobs in the program were vacant last year due to shortfalls.

Thankfully, international momentum is building behind possible reforms that give the WHO more ability to access outbreak sites, and assess and report country response; the U.S., Chile, France and Germany have made proposals. Member countries need to considerably increase the organization’s core funding and ensure additional resources are focused on its health emergencies program. They should also increase support for the health programs of institutions like the international COVAX Facility, the World Bank and Gavi — the global alliance that supports vaccine rollout in the world’s poorest countries — to ensure universal access to the equipment and drugs necessary to fight back future pandemics.

During the current pandemic, the WHO has demonstrated the type of projects it should have more power and financing to back. The organization supplied personal protective equipment and coronavirus laboratory testing kits to developing countries. It also created a registry of hundreds of existing clinical trials and launched the Solidarity global megatrial, which used data from 12,000 patients in 500 hospital sites in over 30 countries to assess the efficacy of four drug treatments — remdesivir, hydroxychloroquine, lopinavir and interferon. None worked, but the global cooperation allowed us to learn that far more rapidly than individual country trials would have. And the WHO helped create the COVAX Facility, which is purchasing vaccines for developing countries to ensure global rollout.

However, delays in advocating for mask use last year partly reflected WHO fears that greater demand would further restrict supply for health care workers in developing countries, a problem it couldn’t address with its limited supplies. And rich countries have continued to stockpile drugs in a way that will considerably delay access even for the most at-risk groups in poorer countries.

Dr. Tedros Adhanom Ghebreysus, the WHO director general, has railed about the world being close to a “catastrophic moral failure” regarding global vaccine distribution and has asked member states to avoid new vaccine deals that threaten COVAX’s ability to purchase vaccines for the developing world, all to no avail.

The cost of better preparation and response requires countries to cede some sovereignty, allowing international health inspectors to investigate and keeping international trade in medical supplies open in times of emergencies. It will also involve funding — about $4.5 billion a year, according to an estimate by the Commission on a Global Health Risk Framework for the Future.

But compare these costs to the price we have paid as a planet with COVID-19, and it is clear that is a bargain. The World Health Organization has a vital and irreplaceable role to play in the global responses to pandemic risks — and every country should give it the support it needs to fulfill that role.