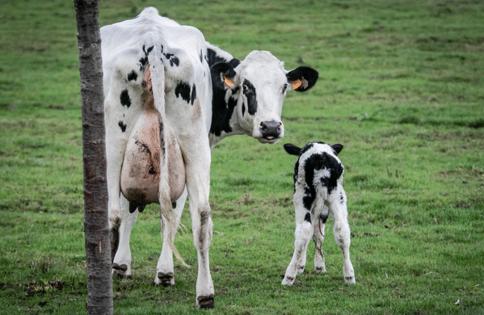 This Mother’s Day, be kind to someone else’s mom — by going vegan. Farmed animals have mothers, too, after all.

We’ve all heard the term “mother hen” used to describe someone with a strong maternal instinct. That’s because hens are doting parents who will even care for other baby animals as if they were their own. When not confined to filthy factory farms, hens lovingly tend to their eggs and “talk” to their unhatched chicks, who chirp back while they’re still in the shell!

But birds used for food never get to see their chicks, because they hatch in large metal incubators. The male birds are useless to hatcheries — because they don’t produce eggs and because they’re not bred to produce the excessive flesh desired by the meat industry — so they are either suffocated to death or ground up alive. You heard that right: Fluffy yellow chicks are suffocated or ground up while still alive — on a massive scale.

The female chicks are sent to egg farms, where they’re crammed into wire cages or confined to dark, crowded sheds and forced to live amid accumulated urine and feces. Part of the birds’ sensitive beaks are cut off with a hot blade — and no painkillers — because in their misery and frustration, the confined birds might peck at one another, causing injuries.

When the hens begin to lay fewer eggs — usually when they’re around 2 years old — they’re sent to the slaughterhouse, where their throats are slit and they’re often scalded to death in the defeathering tank.

Birds endure all this suffering just because humans like to eat their eggs. But it’s so simple to make great-tasting brownies, cookies and cakes, as well as breakfast scrambles and “egg” salad, without actually using any eggs. If you’re planning to make — or order — a meal for your family this Mother’s Day, why not do it without contributing to cruelty to animals?

We can spare gentle mother cows a world of pain and heartbreak simply by saying no to dairy milk and instead enjoying creamy beverages, frozen desserts, gooey cheese pizza and hearty lasagna made with vegan milk.

Like hens, cows are subjugated and their reproductive systems are hijacked and controlled. On dairy farms, female cows are artificially inseminated and kept almost constantly pregnant so that they’ll produce a steady supply of milk for human consumption. Their babies are taken away from them shortly after they’re born. The male calves are commonly killed for veal, and the females are turned into quasi-milk machines like their mothers. They, too, end up at the slaughterhouse when their milk production wanes.

In "An Anthropologist on Mars," Dr. Oliver Sacks wrote about a trip that he and well-known agriculture industry adviser Dr. Temple Grandin took to a dairy farm. They saw one cow in particular who was bellowing and searching for her calf, who’d been taken away. Dr. Grandin noted, “That’s one sad, unhappy, upset cow. She wants her baby. … It’s like grieving, mourning — not much written about it. People don’t like to allow them thoughts or feelings.”

We should be a lot kinder than that. This Mother’s Day, why don’t we acknowledge that all animals are sentient beings who feel pain and suffer when treated cruelly and who mourn when they’re separated from their loved ones? Our own mothers taught us the Golden Rule, to treat others as we would like to be treated. So, let’s honor all moms this Mother’s Day and every day, by following that rule and opting exclusively for vegan foods.