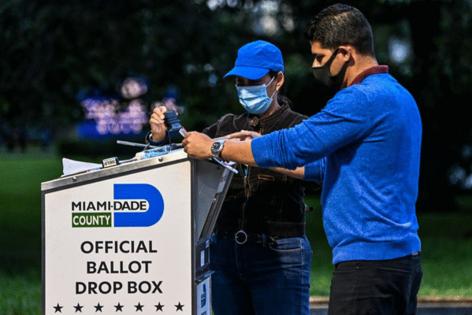 The 2020 elections worked out pretty well for Florida Republicans. But since then, they have twisted themselves into a knot to push for ill-conceived voting restrictions that will not just curb Democratic voting but perhaps their own.

Then-President Donald Trump carried the state by more than 3 percentage points — a landslide, by the usual Florida standards of by-a-nose finishes. In the Florida House of Representatives, Republicans expanded their majority to 78-42. They gained a seat in the state Senate, to widen their rule to 24-16.

Even Gov. Ron DeSantis called the 2020 voting “the smoothest, most successful election of any state in the country.”

Yet they claim a crying need to clamp down harder to ensure “election security.”

Forget that the state’s elections supervisors were full of praise for the performance of their staff and the persistence of the voters. Despite the disruptions of the COVID-19 pandemic, Florida turnout — 77% — was the highest since 1992. Eleven million Floridians cast ballots, far outstripping the 9.6 million in 2016’s intense battle between Trump and Democrat Hillary Clinton.

Success wasn’t good enough for Florida’s Republican politicians. Because it was at odds with the paranoid propaganda that Trump began spinning months before Election Day: If America rejected a leader as competent and beloved as he, it could only be because the other side cheated.

“MAIL-IN VOTING WILL LEAD TO MASSIVE FRAUD AND ABUSE,” Trump tweeted on May 28, part of the drumbeat claiming November would see “the most rigged election in our nation’s history.”

Sad to say, this simple truth must be repeated. And repeated again: The election was not rigged. Trump lost fair and square to President Joe Biden.

And by now, Trump’s continued refusal to concede defeat — a ticking time bomb for our democracy that already sparked the outrageous violence upon the Capitol on Jan. 6 — has metastasized into a fealty test for Republicans. From House Minority Leader Kevin McCarthy, R-Calif., on down, the message is clear: Cop to the fantasy that Trump won or suffer the outcast status threatening Rep. Lynn Cheney, R-Wyo.

So it was that, in February, DeSantis stood in West Palm Beach and unveiled a slate of proposals for voting “reform” that had more to do with raising his profile on Fox News than actually improving elections.

The legislative sausage-maker has churned those proposals into a bill passed by large majorities. Senate Bill 90 simply needs the ceremony of DeSantis’ signature to become law.

SB 90 is a clear attack, not on voting irregularities, but on voter participation. Although not as extreme as Georgia’s infamous new law, it is in the same restrictive spirit as at least 361 bills introduced in 47 states this year with clauses that would make it harder to vote.

The Florida bill limits drop boxes: Mobile drop boxes are prohibited; local elections supervisors must staff all drop boxes and allow them to be used only during early voting hours. Supervisors who allow dropped ballots outside those hours can be fined $25,000.

It adds hurdles to vote by mail: Voters must reapply for mail ballots every two years, rather than the four years in the present law. Thankfully, this requirement won’t start immediately, as bill sponsor Sen. Dennis Baxley, R-Ocala, originally proposed. That would have instantly stripped millions of Floridians of their mail ballot requests, with many not even knowing it.

It prohibits any actions that could influence people standing in line to vote. This provision is likely to discourage nonpartisan groups from offering food or water to voters as they wait in the hot sun — in lines which, thanks to the bill’s other complications, are likely to be longer.

These actions and more, including tighter limits on who may turn in mailed ballots, are obviously aimed at curbing the voting power of young people and people of color — an uneasy echo of the Jim Crow era’s ugly efforts to keep Black people from the ballot box.

There is a silver lining in all this. In their fidelity to Trumpism, DeSantis and his allies may have handicapped themselves. Somehow, they forgot that their own state party has benefited far more from mail-in ballots than Democrats have. In fact, it was Florida Republicans who, starting in the 1980s, touted mail ballots to enlarge the senior-citizen electorate.

Even in 2020, nearly 35% of Florida’s GOP voters cast their ballots by mail, according to University of Florida political scientist Daniel A. Smith. Any obstacle placed on this convenient voting method seems sure to boomerang on the party putting the hurdle in place.

Trump’s attack on mail ballots wasn’t just poisonous to the democratic process; it was foolish. And Florida's Republican leadership has followed him right along.