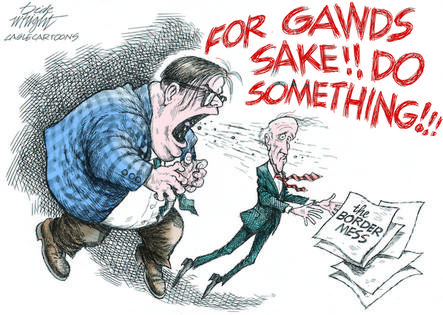 In a move consistent with the Biden administration’s walk back of former President Donald Trump’s tougher immigration actions and guidelines, the Department of Homeland Security announced it would not pursue time limits on student F-1 visas.

Like virtually all of the dozens of visas available to foreign nationals through the federal government, the F-1 visa is wrought with fraud. When President Trump introduced his proposed restrictions, he said his administration was acting in the best interest of American students.

To support its claim that tighter oversight is necessary, the Trump administration gave an example of an international student who remained in the U.S. for 30 years while allegedly attending a dance school. President Trump could have referenced many more student visa fraud incidents.

In 2019, Immigration and Customs Enforcement indicted eight foreign nationals with conspiracy to commit student visa fraud. Going back to 2001, at least one of the 9/11 terrorists also entered on an F-1 visa, while others originally entered on different categories of non-immigrant temporary visas. Under Trump’s plan, most visas would expire after four years, even if the student needed more time to complete a degree - students born in several dozen countries in the Middle East, Asia and Africa would be limited to two-year terms.

An F-1 visa doesn’t have a fixed expiration date, but is instead tied to the course of the study program’s ending date. Overstays are frequent, put students into unlawfully present immigration status and give them an easy opportunity to enter the underground employment market if they present, as many do, falsified job applications.

Some F-1 students studying science, technology, engineering and math may qualify for Optional Practical Training, a program that allows more than 250,000 foreign students to work in the U.S. at white-collar occupations for up to three years. The original intent of the student visa was abandoned long ago. Its purposed had been to offer an international resident an opportunity to get a U.S. degree, return home and then use the acquired knowledge to improve his home country. Today, student visas have, through OPT, morphed into a guest worker program.

The Biden administration defended its decision to terminate President Trump’s more restrictive guidelines by pointing to the comments made on the Federal Register, which said it had received overwhelmingly critical feedback. From the approximately 32,000 comments submitted, 99 percent were opposed.

As part of the big picture, however, 32,000 comments are insignificant. Each year, pre-pandemic, about 1.1 million international students enrolled in U.S. higher learning institutions. You can assume they would oppose more rigid regulations, as would thousands of university professors, administrators, immigration advocates and lawyers.

In its story titled, “The Biden Administration Won’t Pursue Fixed Time Limits on Student Visas,” The Wall Street Journal quoted immigration advocate Miriam Feldblum, the The Presidents’ Alliance on Higher Education and Immigration’s executive director. Feldblum, who had previously opined that time limits would harm international students and the schools that want to enroll them, hailed Biden’s reversal.

Omitted from Feldblum’s statement is that universities profit handsomely from the higher tuition they receive from overseas students, who displace qualified U.S. kids whose parents have paid into the university system for decades. At the University of Virginia, for example, an in-state student pays $423 per credit while a non-Virginia resident pays more than three times that sum, $1,552.

No doubt having to occasionally renew status would be a nuisance. But when the international student considers the trade-off, the small effort is well worth the future benefits: a U.S. university diploma and the earnings potential it represents in exchange for additional administrative paperwork. If the prospective student finds the process too cumbersome, the international learner is not required in the U.S. Worldwide, more than 25,000 universities accept applications each and every year.