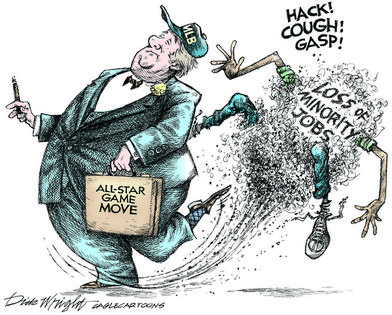 Chicago Tribune sports editor Arch Ward came up with his brainstorm in 1933 when the Windy City hosted the Century of Progress Exhibition, later known as the Chicago World’s Fair. Chicago officials asked local sportswriters to submit ideas for a sporting event that would draw out-of-towners to the fair. Ward was convinced that a game between the National and American League’s best players, with teams selected by the fans, would be a huge success. To promote the contest, Ward called it the “the Game of the Century.”

But first, Ward needed the approval of the leagues’ presidents, no small task. Ward persisted, made his case to AL president Will Harridge and NL president John Heydler, and argued the game would showcase the sport and attract baseball bugs nationwide. When Ward offered that the game’s proceeds would be donated to charity, and that the Tribune would guarantee losses in case rain canceled the game, Harridge and Heydler readily agreed.

Since 1933, the All-Star Game has been played every year except 1945 and 2020. For four years from 1959 to 1962, two games were played, an experiment that players disliked and eventually rejected.

The All-Star Game quickly captured the nation’s imagination, and became the year’s most-eagerly anticipated sporting event. Fans selected two squads resplendent with baseball’s greatest stars, many of whom went on to the Hall of Fame. Among them were position players Frankie Frisch, Paul Waner, Pie Traynor, Charlie Gehringer, Joe Cronin, and pitchers Carl Hubbell and the two “Lefty’s,” Gomez and Grove.

Gehrig’s participation was in doubt. Yankees’ brass worried that if Gehrig played, the Iron Horse might not be able to return to New York in time for the following day’s game against the Detroit Tigers. The train ride from Chicago to New York took about 24 hours. A missed game would cost Gehrig a chance to break Everett Scott’s consecutive-games-played streak, 1,307.

Gehrig never hesitated. If selected, Gehrig said, “I will go gladly, and give up my chance at Scott’s mark.” Gehrig, who said playing was an “honor,” returned to New York in plenty of time to keep his batting streak going and, on August 17, he broke Scott’s record.

With the details settled, 49,000 fans turned out, a capacity crowd. Even though the nation struggled through the Great Depression years, the seats, priced at regular season rates, sold out in about 45 minutes. Finally, at 1:15 pm, under sunny skies and with balmy temperatures, the umpire called out “Play Ball.”

Fans didn’t have to wait long to see what they came for. In the third inning with a runner on first base Ruth, 38, and his career waning, smashed a low liner into the right field stands. Ruth’s blast accounted for the AL’s winning two-run margin that topped the NL, 4-2.

Ward would have a tough time recognizing the 2021 All-Star Game as a baseball event. which has more in common with a three-ring circus sideshow than baseball.

Under MLB Commissioner Rob Manfred’s direction, the Coors Field’s proceedings are a week-long carnival. Some activities require a ticket, Manfred’s favorite type of corporate-sponsored, income-generating events: The Sirius XM Futures Game; the Celebrity Softball Game featuring, as the MLB website promises, “some of the biggest stars in Hollywood;” the Gatorade Work Out Day, and the T-Mobile Home Run Derby. More money-driven events follow.

On game day, “Baseball’s biggest stars walk in style in The Red Carpet Show.” Denver is the next best thing to being among Hollywood’s glitterati at the Academy Awards.

Finally, the MLB All-Star Game presented by Mastercard, a baseball game of sorts, will begin. The millionaire participants, some of whom earn bonuses for being elected, will make cameo appearances, play for an inning or two, then give way to replacements. For reference, of the 16 position players who started the 1932 inaugural game, 14 played all nine innings.

Manfred has killed baseball’s long-standing traditions with his silly rule changed and his overhaul of the All-Star Game. Dinosaur fans are at the crossroads – go with the Manfred flow and await the inevitable further debasement of the beloved national pastime, or find another, more pleasurable way to while away the long summer months.