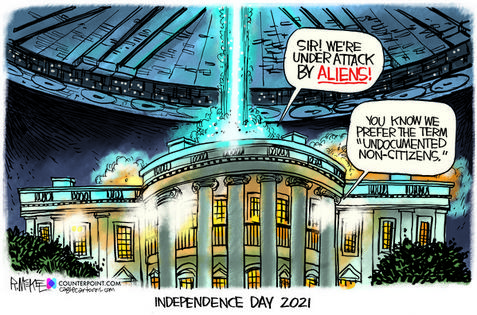 Evidence abounds that the grim possibilities are already well underway. Look no further than South Dakota, where the Biden administration, via the National Parks Department, has arbitrarily denied the state a permit to hold its magnificent annual Mt. Rushmore fireworks display. The administration offered the insincere, dishonest excuse that the COVID-19 threat still lurks.

The true reason Mt. Rushmore has been banned from holding its traditional fireworks display is to punish South Dakota and its Republican governor Kristi Noem. Noem, a possible 2024 GOP presidential challenger, unabashedly supported President Trump, who carried the state by 62 percent. She also refused to shut down during COVID-19. Biden is using the hammer to punish his Republican political opposition.

To rub salt into South Dakota’s wounds, the Bidens will host 1,000 guests on the White House South Lawn for a July 4 barbecue, and to watch a pyrotechnic display over the National Mall.

Biden’s ham-fisted, petty Mt. Rushmore bungling will soon fade from the headlines. But behind the scenes, in a less publicized development that will have long-term, nation-breaking consequences, Congress is plotting to pass an amnesty (or perhaps a series of small amnesties) that will forever alter the country’s future.

Princeton University estimates that, based on historical trends, new Green Card holders petition an average of three relatives – brothers, sisters, nieces, nephews and even in-laws. Doing the simple math, a 2021 amnesty creates potentially anywhere from 36 million to 75 million new immigrants. This is exclusive of the illegal aliens that continue to cross into the country unimpeded. Combined, these are totals that the nation can’t support either environmentally or fiscally.

Without taking into account the illegal alien surge – U.S. Customs and Border Protection reported 520,000 border apprehensions in March, April and May, a 21-year record – the Census Bureau projects that by 2050, the U.S. will have more than 100 million additional residents, a 31 percent increase, for a total population of 439 million. No one on Capitol Hill dares go on the record that their constituents’ communities might expand 31 percent during the next three decades if amnesty is enacted.

Although chain migration is immigration’s biggest multiplier, and even though no one has a clue what today’s actual illegal immigrant count is, the Biden administration is determined to force amnesty upon a reluctant public that wants less, not more, immigration.

The Associated Press and the Miami Herald reported that lead Senate Democrats like New Jersey’s Robert Menendez and California’s Alex Padilla, spurred on by immigration expansion advocates, including the Chamber of Commerce, Facebook Mark Zuckerberg’s FWD.us and former President George W. Bush, want Biden to include amnesty as part of his $6 trillion infrastructure bill or any other major legislation that may come to the floor of Congress. In addition to the existing illegally present population, included for Green Card status would be those holding or eligible for deferred action for childhood arrivals, so-called DACAs, Temporary Protected Status enrollees, and whoever the government designates as essential employees.