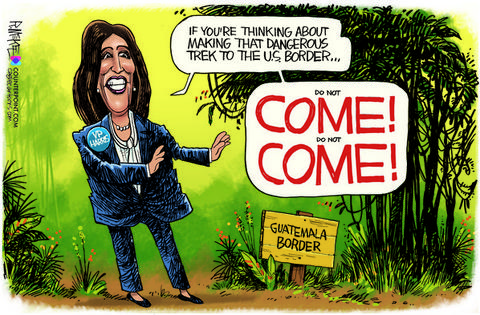 The federal government steadfastly refuses to protect the border or the interior. Since Day 1, the Biden administration has announced to the world that protections that President Trump put into place would be canceled, and that both Immigration and Customs Enforcement and the Department of Homeland Security would be neutered.

Those ill-advised White House decisions have enabled drug and human traffickers to make small fortunes transporting their cargo to the United States, where taxpayers will foot the bill for housing, education and eventually a host of other affirmative benefits. Not a peep from Biden, Vice President Kamala Harris or the president’s cabinet about the unfairness or the devastating long-term effects their indifference will have on the nation.

But for enterprising criminals, the income potential from Biden’s willful neglect is virtually unlimited.

When border patrol agents finally apprehended Victoria Perez, she told them she earned $200,000 over a ten-month period smuggling aliens through the El Paso checkpoint. Perez’s fee was $1,500 per individual if the checkpoint was closed; $600 if open. Her work was easy. By driving only two days a week, Perez raked in, calculated Washington Times reporter Stephen Dinan, more than sitting members of Congress, $174,000 annually, and about three-times a border agent’s $70,000 starting salary. Perez was apprehended at a Texas checkpoint with 12 passengers, or at $1,500 a head, a load worth $18,000. Although Perez pled guilty, she was arrested again for trafficking during the six-month period before she was ordered to jail.

Income opportunities abound for other players in human trafficking’s criminal endeavor. Stash house operators, deliverymen who bring food and other supplies to the stash house, and extortionists who beat migrants to force their families to shell out more on top of the already exorbitant fees paid up front. In all, migrants pay billions of dollars each year to be dangerously and illegally smuggled into the U.S., a dicey gamble that sometimes ends in apprehension or even death. Migrant deaths at the border have nearly tripled since the same time last year, from 45 to 128.

Experts predict that fees will rise as long as the Biden administration continues to encourage illegal crossing. Harris’ much-touted trip to Mexico and Guatemala to uncover migration’s root causes was laughed off by those governments as a waste of their time, a conclusion that the White House agreed with.

Florida Rep. Kat Cammack sent a letter to Facebook after she uncovered ads for human smugglers and cartels on the platform. Cammack said migrant border crossing treks are organized via Facebook communications. Upon arriving in the Donna, Texas, processing facility, Cammack asked young migrants how they came to the U.S. All responded that they coordinated logistics through Facebook, paid through Facebook and exchanged ideas on the Facebook-owned WhatsApp. A link titled “Viaje a Estados Unidos” took Cammack to a page with directions, routes and prices: $6,000 to enter the United States, $9,300 for drop-off in San Antonio.

According to U.S. law, encouraging or inducing an alien to come to, enter or reside in the U.S., or aiding and abetting any of these activities, is subject to financial penalties and imprisonment for periods of five years or longer. The likelihood of the Biden administration criminally punishing Facebook is a statistical impossibility – less than zero. Facebook played a prominent role in assuring that Biden would be elected, and the president isn’t likely to punish his friend regardless of the helping hand it provides in the illegal border surge.

During Biden’s presidency, immigration crime perpetrators go unpunished, but Americans must unfairly endure migrant waves flowing into their local communities, and then subsidize the everyday lives of these people for the indefinite future. Nothing could be more unjust.

Whether Warren Spahn was on the mound or in World War II trenches, his opponents agreed that no one was tougher.

Recently, the U.S. Department of Labor announced an 18-month delay in the effective date of the final rule, “Strengthening Wage Protections for the Temporary and Permanent Employment of Certain Aliens in the United ...Read More