One Last Tribute to My Dad 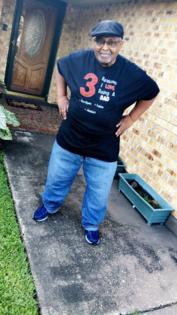 It is often said that a father is the first man a daughter loves. She sees him as a pillar of strength, runs to him for protection when she is frightened and can almost always coax him to pamper her. It's the beloved joy of being a daddy's girl, and on Father's Day, dads get to bask in the abundance of this precious adoration. For me, many of my fond childhood memories with my dad were the spontaneous weekend trips we took to Six Flags in Atlanta. Back in the golden days of the 1970s, the main roller coaster attraction of the theme park was the Great American Scream Machine, whose steep fall of 105 feet scared me out of my wits. Dad and I would raise our arms and scream and laugh throughout the two-minute ride that went 57 miles per hour, turtle-time by today's standards. After making our rounds to the other popular rides like the Log Jamboree and the Dodge City Bumper Cars, we'd head back to Athens and stop for dinner at our favorite spot: Ponderosa Steakhouse. Dad always ordered a garden salad and a well-done sirloin topped off with A-1 sauce. I became a steak lover, too, and I rarely had a child's plate.

These memories were the first to come to my mind when my father passed away on June 8. His health had been failing due to Parkinson's Disease. Although I knew he was physically declining, I was hoping that he would live just a little bit longer so that we could continue our Sunday afternoon chats . I was also hoping I could visit him in New Orleans shortly after his birthday in July. I had to make that trip to the Crescent City sooner than I planned with my mother to say goodbye. In reflecting on the relationship I had with my father as an adult, it was one of reconciliation and forgiveness when we reconnected in 2005 during the aftermath of Katrina. My parents divorced in 1974 when I was five years old, and I spent weekends with my father in Athens until he moved back to New Orleans. My parents had a bitter disagreement regarding my summer visitation, which ended in 1979. I did not see my father again until I was 36.

It is remarkable I can honestly share that I did not harbor any hatred towards my parents during these years. Of course, growing up, I wondered what the main reasons for their separation were, but I did not allow anger to infiltrate my heart. That was truly God's favor on my life. My father offered to answer any questions that I had when he wrote me a letter shortly after Katrina hit, but by this time he was in his late-60s, and I decided that I wanted to focus on the moments we would share moving forward. I was settled in Columbus, Ohio, and he made plans to come visit me. One of the first things we did after I picked him up from the airport was to have dinner at a steakhouse. Since there was no Ponderosa, Ryan's had to suffice, but we still got our classic salads and sirloins. As we ate and talked, Dad began to catch me up on all the things that had transpired in his life. He had remarried, and he and his wife, Tanya, had a daughter, Kortlynn Jenae. I also had another sister named D'Laika. Dad told me what my first cousins, Edwina and Pat, were doing, who were my childhood playmates during my summers in New Orleans. He certainly had a lot to say with so many years having passed by, and from 2005 until now, I've always felt that he wanted to say much more. When his illness began to progress, I started calling him more often, and I assured him that I loved him. I told Dad to confess any regret and feelings of failure to God, who had already forgiven him through Christ. As Scripture declares, God's love bears all things and suffers long, which covers every sin and mistake we have made. I'm sure Dad wished we could have spent more time together during his final days, but the time we had was showered with grace, something I know he greatly cherished.

Dr. Jessica A. Johnson is a lecturer in the English department at Ohio State University's Lima campus. Email her at smojc.jj@gmail.com. Follow her on Twitter: @JjSmojc. To find out more about Jessica Johnson and read features by other Creators Syndicate writers and cartoonists, visit the Creators Syndicate website at www.creators.com.

I've been all-in for the cicada mania and invasion this summer. I'm not really a diehard bug person, but I have always been captivated by certain insects. I think praying mantises have a cool and creepy swagger, and I am ...Read More

As the 100th anniversary of the Tulsa Race Massacre was observed from May 31 to June 1, I spent part of Memorial Day watching the PBS documentary: "Tulsa: The Fire and the Forgotten." Like many Americans, I am learning ...Read More

The 2020-21 academic year is now in the books, and I am so grateful that I finished it successfully! After the chaos COVID-19 brought last spring, which forced colleges and universities to hastily cancel in-person classes,...Read More

"And let us not be weary in well doing: for in due season we shall reap, if we faint not." -- Galatians 6:9

This Scripture came to mind as I was reading the latest research from the Barna Group, which found that 29% of U....Read More

If you're a diehard NFL fan, you know that the 2021 draft was filled with lots of quarterback drama. It was a given that former Clemson star Trevor Lawrence would be the No. 1 pick of the Jacksonville Jaguars. The intrigue...Read More