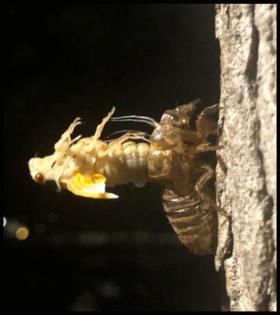 I've been all-in for the cicada mania and invasion this summer. I'm not really a diehard bug person, but I have always been captivated by certain insects. I think praying mantises have a cool and creepy swagger, and I am soothed by the chirpings from the night swarm of crickets during the summer evenings when I visit my mother in Georgia. Cicadas, more specifically the periodical Brood X that are taking over the eastern United States until the end of July, are the current insect rock stars because we will not see them again until 2038.

Ever since Brood X began emerging along the East Coast and Midwest, their arrival has been met with great enthusiasm by many people. However, just as many folks are dismayed at the cicadas' clamorous entrance in the treetops over their heads with males putting on a decibel-level chorus in their attempts to attract mates. The sonorous hums of their love songs can rival the engine of a lawnmower. Those who are not Team Cicada and are dog owners are finding the thousands of exoskeletons piling up in their backyards pretty icky while trying to prevent their canine companions from munching on them like potato chips. And speaking of munching, cicadas are becoming delightful delicacies for people in the form of tacos and cicada scampi, and they are even being dipped in chocolate. I've learned that cicadas are also a good source of protein and taste somewhat like shrimp, but I'd have to respectfully decline eating them.

I am now on my summer vacation with my mother, and she is finding it hilarious that I'm so disappointed that we are not seeing hordes of cicadas buzzing around while out on our daily walks. We're in Georgia's Clarke County, and this is not one of the five northeast counties of the state where cicadas are showing up. It's just been the usual wonders of nature that we normally encounter enjoying the outdoors: squirrels and chipmunks scurrying up oak trees, deer casually lounging and eating the front yard grass, and red birds perching on magnolia branches. Since cicadas mate in trees, I actually imagined that a male wooing a female with the tune of its tymbals would have quite the southern romantic flare on a magnolia bloom.

While I'm getting over my summertime regret of not being able to see Brood X cicadas in person, I have given quite a bit of thought to the lessons of time that I believe God wants to teach us by observing these unique red-eyed and orange-winged creatures. Cicadas are definitely having a ball right now as they are whirring about without regard to any inconvenience they may cause, but they have a distinct purpose for being here, which is to mate. Time is not a luxury for them. Males and females must connect within four weeks after they crawl out of the ground. Once the next generation is secure, they will experience over a decade of underground life sucking tree root sap after their parents die off. In thinking about the time that we have as human beings, James 4:14 says that our lives are like a vapor, meaning that, in the grand scheme of things, life is actually short. If you reflect on what you have accomplished since 2004, when Brood X was last on the scene, what would you say about how you've spent your time? Did you meet the goals you set, or do you feel that you wasted several years? I believe Brood X cicadas can be compared a little to the meticulousness of ants described in Proverbs 6:6-8. Ants are praised in these verses for not being slothful and for having the wisdom to gather the food they need between seasons. While the life span of periodical cicadas after they appear is extremely brief compared with ants, cicadas immediately know what they must do to ensure the survival of their species. They are wise with the fleeting time they have, which is absolutely amazing to witness. This is the divine inspiration I am taking from them while we have a few weeks left to marvel at their presence.

Dr. Jessica A. Johnson is a lecturer in the English department at Ohio State University's Lima campus. Email her at smojc.jj@gmail.com. Follow her on Twitter: @JjSmojc. To find out more about Jessica Johnson and read features by other Creators Syndicate writers and cartoonists, visit the Creators Syndicate website at www.creators.com.

As the 100th anniversary of the Tulsa Race Massacre was observed from May 31 to June 1, I spent part of Memorial Day watching the PBS documentary: "Tulsa: The Fire and the Forgotten." Like many Americans, I am learning ...Read More

The 2020-21 academic year is now in the books, and I am so grateful that I finished it successfully! After the chaos COVID-19 brought last spring, which forced colleges and universities to hastily cancel in-person classes,...Read More

"And let us not be weary in well doing: for in due season we shall reap, if we faint not." -- Galatians 6:9

This Scripture came to mind as I was reading the latest research from the Barna Group, which found that 29% of U....Read More

If you're a diehard NFL fan, you know that the 2021 draft was filled with lots of quarterback drama. It was a given that former Clemson star Trevor Lawrence would be the No. 1 pick of the Jacksonville Jaguars. The intrigue...Read More