So this is John Lennon’s 80th birthday (and what have you done?) 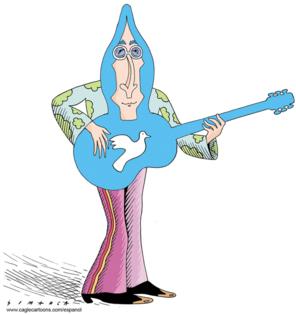 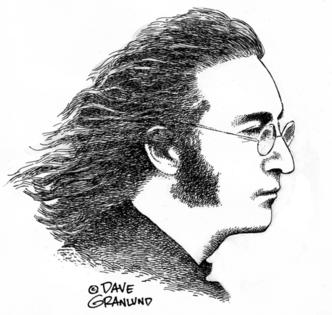 Ironically enough, I did not sleep PEACEFULLY last night, because I was concerned about taking the wrong tone with this column about the iconic singer/songwriter/musician and anti-war activist who wrote “Give Peace A Chance.”

Friday, October 9 marks the 80th anniversary of the birth of John Lennon (who was murdered by a deranged fan on December 8, 1980 at age 40).

In honor of Lennon’s outspokenness, I hesitated about writing a fawning Beatles-fan puff piece; but neither did I want to lay too much criticism on a fellow fallible human being who isn’t here to defend himself.

Then I got the idea of thinking of Lennon as a Facebook friend.

Facebook allows you to experience the touchy-feely side of people you may know only casually. Likewise, the home movies in the video for Lennon’s “Beautiful Boy” (from the “Double Fantasy” album) genuinely tug at the heartstrings.

Various Facebook memes let you see your friends in a different light (“What would your pirate name be?” and the like). I got choked up seeing actor Robert Carlyle’s cameo as a 78-year-old unassuming, non-celebrity Lennon in the 2019 fantasy movie “Yesterday.”

Facebook shows you how your friends strive to grow and reinvent themselves. The Beatles COULD have hung on as a nostalgia act for decades, playing their “Ed Sullivan Show”-era hits at local dances and Rotary Club fundraisers; but (both before and after the breakup), Lennon thrived on innovation, experimentation and avant-garde aspirations, creating a deeper bond with the listeners and society.

With Facebook, you get treated to previously unseen “glory days” snapshots of your friends. On a recent weekend, my wife, our son and I FINALLY got to watch and enjoy the zany 1965 Beatles movie “Help!”

If you’re like me, you sometimes click “Like” without really scrutinizing all those vacation albums and kindergarten graduation albums that your friends inundate you with; but every now and then, you have the luxury of time. Lennon left a discography containing much more than commercial hits such as “Power to the People” and “Instant Karma” and I hope I live long enough to explore it.

And, of course, SOMETIMES your friends – no matter how witty, talented and lovable they are - espouse political beliefs so wrongheaded that they convince you they were repeatedly dropped on their heads as youngsters.

Prospects of a long, hot summer bring pet peeves to the surface.

Surely someone besides me encounters deceptive packages of frozen microwaveable meat. “Tear here,” they cajole. So, you tear on the dotted line, only ...Read More

“I could search the whole world over/Until my life is through/But I know I’ll never find another you.” - as performed by The Seekers.

Five years ago, in conjunction with my 25th wedding anniversary, I was halfway ...Read More

With the school year ending and the economy slowly reopening, let’s reminisce about the illustrious history of summer jobs.

I’m sure many of you worked your way through high school and college by flipping burgers, ...Read More

By the time most of you read this, my son Gideon will have marched across the gymnasium floor and received his high school diploma.

I have brainstormed some sage advice for Gideon’s next phase and hope that his fellow...Read More

My late father once confided his belief in “universal knowledge.”

He felt that God gave humans finite, physical brains to prevent them from knowing EVERYTHING.

That theme is echoed in the book I’m currently ...Read More

Misery loves company, but it’s cold comfort that many of you – like me - still haven’t filed your 2020 income tax returns.

(And I’m aware others of you had already pre-spent your refund SIX MONTHS AGO, but come ...Read More