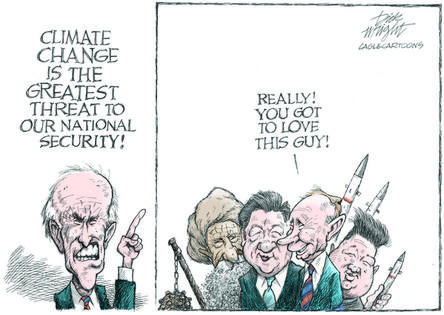 President Biden is taking his first trip overseas as President.

After stopping in England he’ll summit with European leaders in Brussels and then move on to his mano-a-mano meet-up with Vladimir Putin in Geneva.

I pray to God he does a great job, but I worry Putin will eat Joe alive.

Historically, left-wing dictatorships like Russia, China and North Korea have done that to our leaders when they go visiting overseas.

When they make deals with us, left-wing countries like to play the geopolitical version of Rodney King’s famous plea “Can we just all get along?”

But as we’ve proven time and time again, the answer is always no. We can’t get along with leftists overseas – or at home.

And now that “Joe O’Biden” and the Democrats are in power, the stage is set for another round of foreign policy blunders.

We’ve watched Russia and China test the Biden administration’s backbone since Day One.

While Biden has been weakening our military, Russia is gearing up to attack Ukraine and harboring cyber criminals who’ve used ransomware to shut down our gasoline pipelines and meat processors.

But Biden also removed economic sanctions on Russia that allowed the Nord Stream 2 natural gas pipeline to energy-dependent Germany to proceed -- which gives Putin a strategic political weapon to bully Europe with that he’ll be sure to use.

Meanwhile, Biden and left-wingers in Congress are doing their best to weaken our healthy oil and gas industry in the name of saving the planet from the mythical green monster of global climate change.

As for China, it’s been militarizing islands in the South China Sea for decades and presidents of both parties have done nothing.

Now Communist China is continuing to strangle the last breaths of democracy in Hong Kong and making threatening noises about invading Taiwan.

Iran’s mullahs, meanwhile, are licking their lips over the prospects of Biden re-signing the Iran nuclear agreement, which the Obama administration signed in 2015 and Trump withdrew the U.S. from in 2018.

That bad Obama deal lifted some economic sanctions on Iran in exchange for it dismantling most of its nuclear weapons program and allowing extensive international inspections.

Iran is no longer in compliance. But Biden says if Iran returns to compliance we’ll return to a bad deal that probably will lead to a revival of Iran’s nuke program and ratchet up Middle East tensions between Iran and Israel and Saudi Arabia.

And if you refuse to become the president, and if you still refuse to understand that the rest of the world looks to America to be strong and not weak, then you’ve emboldened the enemies of America and freedom.

Like my father also once said, there were four wars during his lifetime – none of which was started because America was too strong.

That’s why I fear for my kids and grandchildren today.

Are they going to be facing World War III in 20 years because we're defunding our military and bent on “getting along” with brutal dictatorships that hate us and want to do us harm?

Are we allowing China and Russia to become buddies because their common enemy is the USA and their common goal is world dominance? If you don’t see trouble coming, you’re blind to history and geopolitical realities.

President Biden keeps telling us “America is back.” But back to what?

It’s been the traditional mission of the left – whether the left is focused at home or overseas – to weaken America.

Biden, consciously or not, is doing just that with his messaging. He keeps saying “America is back,” but what he’s really doing is putting America on its back.

Sunday is D-Day plus 76 years. And on Memorial Day this week we honored and mourned all the men and women who've died while serving in our military.

So maybe it’s a good time for politicians and pundits from both ...Read More

Facebook decided this week it’s no longer “misinformation” to wonder whether COVID-19 was manmade by Chinese scientists in a biolab in the Wuhan Institute of Virology.

But it’s not just Facebook. The national ...Read More

That’s what I said Monday on Newsmax when I was asked what I thought would happen in Tuesday’s gubernatorial recall election in California.

It didn’t surprise me that in a state where ...Read More

As the country sadly marks the 20th anniversary of the 9/11 terror attacks on Saturday, I’ve been thinking about where America was 20 years ago and where it's headed.

In the weeks and...Read More