Taking a Knee Against China 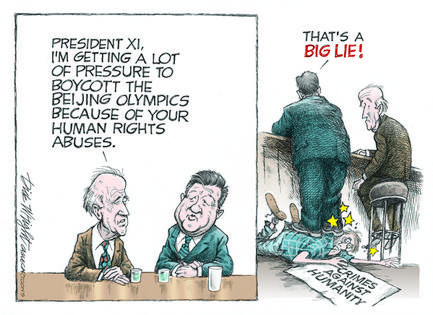 China is claiming House Speaker Nancy Pelosi is “full of lies and disinformation.”

That’s not necessarily untrue most of the time.

But in this case Pelosi is being blasted by Communist China’s loudest mouthpieces because she’s actually done the right thing – almost.

To protest China’s long list of serious human rights violations, which is a good thing, Pelosi has urged global leaders and diplomats to boycott the Winter Olympics in Beijing in February.

But somehow, I don’t think China’s rulers will be losing sleep over your idea.

Their country is not going to look bad in the eyes of the world or lose the propaganda benefit of hosting the Olympics because Kamala Harris, Secretary of State Antony Blinken and their global counterparts don’t show up in Beijing.

A boycott by a bunch of no-name diplomats will never persuade the Communist Party of China to release a million Uyghurs from its concentration camps, take its knee off the neck of Hong Kong or decide to transform its oppressed nation into East Switzerland.

She’d never suggest it, but what Pelosi should have proposed is for Olympic athletes in America and other free countries to protest China’s multiple crimes by staying home.

A well-publicized boycott staged by America’s elite athletes would have a great impact on China’s “good name” – and might even pressure it to free-up its 1.44 billion captive citizens a little.

Most of the country has seen video of the tragic death of Ma’Khia Bryant.

She’s the 16-year-old girl from Columbus, Ohio, who was shot four times on April 20 by a police officer as she was about to stab another ...Read More

Decades ago my sister Maureen often used to call the Republican Party “The Stupid Party.”

Instead of concentrating on retaking the ...Read More

It’s been a rough week for conservatives, Republicans and all Americans.

The torture started Sunday evening with the Academy Awards ceremony, which sounded like it was produced by the AOC/Stacey Abrams wing of the ...Read More

So let me get this straight.

My wife, daughter and I usually drive over to Las Vegas two or three times a year.

We don’t go to gamble. We go for three things - the concerts, the dinners and the pools.

Concerts and most of the shows have yet to...Read More

Will someone please lend President Biden a history book?