Why Kyle Rittenhouse Should Walk Free 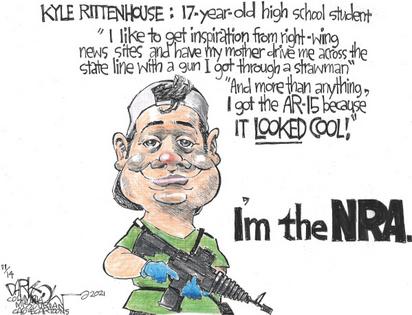 If Kyle Rittenhouse is convicted of anything other than, at most, a misdemeanor offense, I will write glowing articles about Nancy Pelosi, make Christine Blasey Ford my social media profile photo, and contribute to NARAL. And to top it all off, I’ll put my pronouns (she/her/you figure it out) in my electronic email signature.

That should give you some idea as to how convinced I am that the jury will find Rittenhouse not guilty on the most serious charges, including first degree intentional homicide.

I hope that Black Lives Matter will not claim this scalp, and the talking heads at CNN and MSNBC, not to mention their fellow travelers in the print media, will have to stand down in shame. And I hope that this time, a mediocre and politically motivated prosecutor will not be able to advance his career on the body of am 18 year old boy, who has now become the symbol of all that the left hates.

Kyle Rittenhouse is guilty of only one thing: youthful stupidity, and a failure to understand that all of your best intentions are no match for nihilistic anarchists hell bent on burning down the only world you’ve ever known.

Not being a criminal attorney, you have to take my assessment of the legal aspects of this case with a grain of salt. I make no pretense of expertise in this area of the law, and have to rely on those who actually are. One former prosecutor thinks the government not only over-charged the case, but managed to undermine its own arguments with witnesses who buttress the defendant’s claim of self-defense. Another thinks the prosecutor is horrible, but wonders whether Kyle’s trip to Kenosha bearing weapons will have some impact on the jury.

There’s a healthy split of opinion in the legal community on whether Rittenhouse proved self -defense, and we won’t know which side called it correctly until the jury weighs in.

Unfortunately, a lot of people have opinions about this case, which has become as much a reflection of the troubled social climate as the O.J. trial was almost three decades ago. I remember that when the not guilty verdict was rendered, the country reacted as if they’d seen two separate trials. African Americans, on the whole, were thrilled that a Black man had somehow beaten the system, while a majority of the rest of us were horrified at the obvious miscarriage of justice.

Thirty years later, I have to reflect on my own reaction to the O.J. debacle. It was, in fact, a debacle, because there is no question that even though the prosecutors did a particularly mediocre job, O.J. was factually guilty beyond any reasonable doubt. The trial reflected the maelstrom we found ourselves in the 1990s, mixing race with celebrity and violence against women. A perfect societal storm.

Not much has changed. It is ironic that the Rittenhouse case involves a white defendant, white shooting victims, a white prosecutor, a white judge, and white defense attorneys, and is still somehow a referendum on the amount of melanin in your skin. It is O.J. redux, only this time the domestic violence angle is replaced by hatred of Trump and MAGA culture.

That’s incredibly troubling. We have Harvard Law grad Elie Mystel calling the presiding Judge Bruce Schroeder a “racist” and arguing that Rittenhouse will get off only because he knows “what white people are willing to do to defend white supremacy.”

You have that washed-up, bitter geriatric Keith Olbermann calling for a prosecution of the “racist” judge. You have CNN commentator Wajahat Ali comparing the judge to a Klan member, tweeting, “This dude should just put on the hood and show off his Halloween costume.” And these are just the printable comments.

Then, perhaps most troubling, is candidate Joe Biden using a photo of Kyle Rittenhouse as the face of “white supremacy” in an ad last year. Nice way to put a target on the back of a criminal defendant, Joe.

I suppose we shouldn’t be surprised that the left is again out in full force using that sad, tired trope of racism. It’s been effective since well before the days of O.J. But as an attorney who respects her profession, I’m disgusted by the sort of people who will use their own obvious prejudices to convict an 18 year old of murder when their lying eyes tell them otherwise.

And because my faith in my fellow Americans has been shaken to its core by these ridiculous displays of bigotry on the part of those who should know better, I’m preparing myself that upcoming contribution to NARAL. I pray to God I’m spared that hell.