Tragedy in Afghanistan is a Call to Action 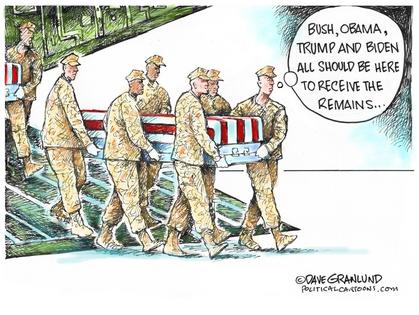 I come from a family of fighting men.

My cousin Adolph was a paratrooper who landed at Normandy on D-Day, and the parachute he used - stained with blood and dirt - was turned into my cousin Helen’s wedding dress. My father spent two years in Thule Greenland, at a godforsaken outpost at the North Pole during (no pun intended) the Cold War.

My uncle Louie was a Marine, stationed in Beirut during one of the early crises in the 1950s, and my cousins Alex and Anthony served honorably in Vietnam. Last but not least, my brother Michael was stationed in Iraq during the prosecution of Saddam Hussein as a civilian employee of the Department of Defense.

France. Greenland. Beirut. Vietnam. Iraq. Postcards from the front lines, and a part of my DNA. There is nothing more honorable than service to this country that has given so much, and asked for so little from the majority. But America has demanded that last full measure from the men and women, but especially the men, who have served in combat positions, and we only stop to consider the debt when tragedy occurs.

Last week, 13 U.S. service members were killed by terrorist bombs in Kabul. They were not in active combat. They were doing something that adds poignancy to their mission: Helping civilians escape the hellhole in Afghanistan created by the men in suits.

President Joe Biden is responsible for this, as was Donald Trump before him, and Barack Obama, and George W. Bush, all the way back to the presidents and senators who thought it was a great idea to arm terrorists so we could get back at the Soviets.

But to dwell on this is to ignore the nature of the sacrifice those 10 Marines, two soldiers and a Navy corpsman made last week. They were in the process of evacuating desperate civilians, U.S. allies and their families, women and babies just born, from a country that had fallen into immediate chaos, and imminent tyranny. They were trying to save those people with the power of their US imprimatur, their courage, their intelligence, their ingenuity and to some extent, their weapons.

Their mission was not to capture a hill or fortify a city. It was to be the separate links in a human chain, person by person, life by life, breath by labored breath, leading toward the open door of infinite possibility: Freedom.

The picture of the Marine sitting down and cradling a newborn Afghani child went viral, and the reason it did is because it spoke to something deep within all of us that lies dormant until tragedy occurs: The understanding that in the dark and dire moments, the touch of a human being is the greatest weapon against despair and the strongest defense against disaster.