Columbus Statue Decision is a Victory For All 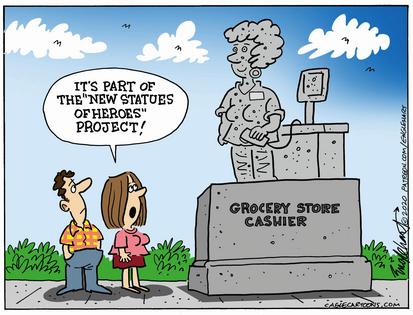 Last summer, I spent a few days standing in front of the Columbus statute at Marconi Plaza in South Philly.

A lot of good folk were there around me, laughing and singing and eating Wawa hoagies. We were there to show solidarity with the Italian American community of the city, since most of us were card-carrying members. We wanted to show our support and create a human line of defense against a mayor and the woke jokes in his administration who wanted to erase our history.

Of course, the mainstream media didn’t see it that way at all. Most of the establishment sources of news treated the defenders of the statue as vandals, thugs and racists. There were front page photos of some guys carrying baseball bats and sound bites of them hurling epithets at tender tattooed bicycle mamas with purple hair and bruised social sensitivities. And there was this narrative about the Proud Boys having both organized and infiltrated the group.

We were no longer normal Philadelphians trying to preserve our history and some public art. We were a security threat.

I remember thinking, at the time, why all of this animus towards a statue that has existed without incident for over 40 years in the placid, verdant heart of one of the city’s iconic neighborhoods? Which of the residents who had grown up here, built families here, invested their life’s savings here and sent their children to school here had complained about the racist colonizer who had allegedly killed indigenous children and raped their mothers? Was it the butcher on the corner of Broad and Packer? The baker on South Ninth Street? The bricklayer off of East Passyunk? The retired schoolteacher on Fernon street? The pizza maker on South Broad?

No, it was baristas from other parts of Philadelphia who had a problem with the statue of Columbus, and with the proud Italian Americans who built the city and the plaza that hosted his image. It was the newbies, the carpetbaggers from suburban climes, the youngsters who likely had ancestral roots in Italian soil but who were taught to hate themselves and their own heritage.

For two years, there was a battle over that statue, and at every turn and juncture, the media made it seem as if the defenders of Columbus were the same people who put their knees on the neck of George Floyd. If stood with Columbus, we trampled on the rights of the indigenous, those of color, those who are allegedly the oppressed refuse of society.

But that didn’t bother George Bocchetto, the brave attorney of Italian descent who waged battle in the court of law, filing motions and injunction requests and petitions to stop the removal of our heritage. Two weeks ago there was a final hearing on the effort to protect the Columbus statue and keep it at Marconi Plaza.

And last week, Judge Paula Patrick ruled that the city had absolutely no legal basis to remove the statue, issuing a scathing decision that contained this language:

“It is baffling to the Court that the City of Philadelphia wants to remove the Statue without any legal basis. The City’s entire argument is devoid of any legal foundation.”

And that was the nice part. The decision is both precise and brutal, ticking off the flawed reasoning, mediocre lawyering and dishonest motivations of the city in trying to punish Italian Americans for being proud of their heritage. The decision is a complete and total victory for not just Italian Americans, not just the people of South Philly, but for every person who believes in the integrity of the legal system and the respect that we need to show everyone, not just those demographics that whine the loudest about oppression.

Of course, there are people who are particularly displeased with the decision. The Philadelphia Inquirer ran a story discussing the legal victory, and then took a completely irrelevant and borderline defamatory pot shot at Judge Patrick, trying to connect her to QAnon conspiracies. This African-American female judge, who made the mistake of registering as a Republican, is smeared by innuendo by the same organization that smeared the good people of South Philly who defended the statue.

But that doesn’t matter, in the grand scheme of things. What does matter is that a devoted group of people with the will to take a stand for their beliefs, their heritage and their history won a victory on a battlefield otherwise strewn with the road kill of political correctness.

The baristas of Philadelphia will need to find another windmill to swing at. Columbus is there to stay.

I’ve been practicing immigration law for over 25 years, and I speak four languages fluently. I’ve traveled widely outside of the United States, and lived abroad for large stretches in the 1980s and '90s.

All of this...Read More

I’ve been practicing immigration law for over 25 years, and I speak four languages fluently. I’ve traveled widely outside of the United States, and lived abroad for large stretches in the 1980s and '90s.

All of this...Read More

It’s taken a while for me to write those words in exactly that way - “Lucy Flowers died.” I’ve written about it on frequent occasion, but usually turn ...Read More

It’s taken a while for me to write those words in exactly that way - “Lucy Flowers died.” I’ve written about it on frequent occasion, but usually turn ...Read More

It’s taken a while for me to write those words in exactly that way - “Lucy Flowers died.” I’ve written about it on frequent occasion, but usually turn to euphemisms: “Left ...Read More