Free Speech Extends to Students, Too 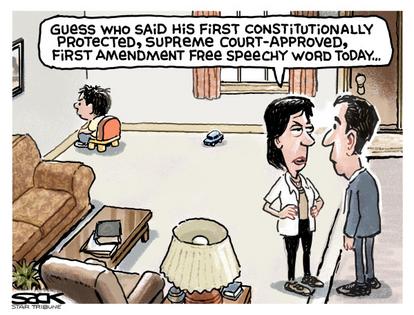 One of the first cases I studied at Villanova was Tinker v. Des Moines, a seminal case in free speech and student’s rights.

In December of 1965, the week I turned four, a group of high school students in Des Moines Iowa decided to wear black armbands to class in protest of the Vietnam War. They were suspended, and filed a lawsuit against the school district claiming that their First Amendment rights had been violated. Two lower courts dismissed their claims, but the Supreme Court reversed.

Holding that the student’s right to freedom of expression had been compromised, the 7-2 majority held that unless the “speech” was disruptive or that it would “materially and substantially interfere” with school activities, it could not be forbidden.

While there have been other cases that bubbled up through the system over the past half century, none has been as important in that area where students rights intersect with government interests than Tinker. Until, that is, this past week, when an eight-justice majority ruled in Mahanoy School District v. B.L. that a disappointed cheerleader at a Pennsylvania high school who dropped a bunch of “F” bombs on social media should not have been suspended because it violated her First Amendment right to expression.

There are some significant differences between the Tinker decision and Mahanoy. The most obvious one is that the student in Tinker wore her armband and expressed herself on school grounds, while Brandy Levy, the “B.L” in the latest ruling, “expressed” herself at the mall. The other one that I noted was that Mary Beth Tinker was protesting an unpopular war in a quiet and dignified way, while Ms. Levy was protesting her inability to swing some Pom Poms with a tirade that would make foul-mouthed Sarah Silverman proud.

And yet, the principle is the same: Children do not lose their rights to free speech every and any time an adult or an administration is offended by that speech.

Justice Stephen Breyer, writing for the majority, noted that while a school may very well have an interest in student speech (as the court in Tinker acknowledged) it can’t suppress pure speech with which it disagrees except in very specific, narrowly drawn situations. The fact that Brandi Levy’s language would have gotten a bar of soap stuffed in her mouth in most decent families was irrelevant to whether that speech was entitled to constitutional (if not grammatical or pedagogical) respect.

The majority also held that if speech could be considered threatening, bullying or otherwise dangerous and disruptive, it could be subject to punishment even if uttered off campus. The point that Breyer made was that parents are the ones who should be monitoring their children’s behavior, and the fact that the Levy parents were so obviously unsuccessful in raising a dignified and respectful child did not mean that it was the school’s place to do so in loco parentis.

Justice Clarence Thomas was the sole dissenter. He wrote that Levy’s speech was automatically treated as “off campus” by the majority when in fact that concept is a lot trickier in the social media age: “But where it is foreseeable and likely that speech will travel onto campus, a school has a stronger claim to treating the speech as on campus speech.” According to Thomas, technology that enables the transmission of messages from a mall to students who might be on campus, in their homes, at the doctor, at an extracurricular game or at that same mall muddies the waters.

It’s a great point, and one that the majority should have looked at in more detail, particularly with the proliferation of social media these days that have basically placed everyone within a click of being “friends” with strangers, privy to their deepest “confidences” that can be preserved for posterity with the screen shot function.

And it’s worth noting that we are of course talking about public schools, which are essentially an arm of the government, so the rules are somewhat different when dealing with a private institution.

But ultimately, the court was right to rule activities which would otherwise be permissible for an adult should not be forbidden to a child when they involve pure speech and expression. If a student doesn’t lose her First Amendment rights when she walks into the classroom, she certainly shouldn’t lose them when walking into Starbucks.

Those of us who spent the past year watching school districts draw up lesson plans that tell students what words they can use so as not to “trigger” their classmates, and who have used totalitarian tactics to erase mascots and traditions should rejoice in the fact that for a brief shining moment, the government was told to back off.