The FBI Raid is Terrible News for Trump. Why is Trump World Unable to Contain its Excitement? 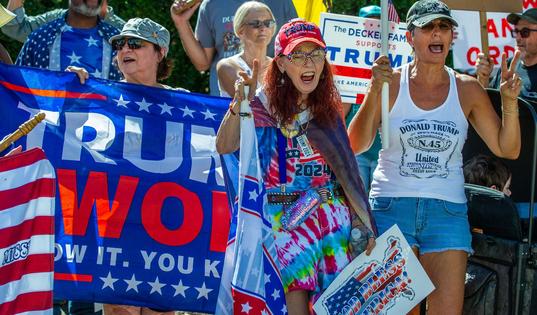 "When you're attacking FBI agents because you're under criminal investigation, you're losing."

That 2016 tweet from Trump campaign adviser, and future White House press secretary, Sarah Huckabee Sanders, then referring to Hillary Clinton and Democrats, took on a special irony on Monday, as former President Donald Trump and his allies spent much of the day and night railing against the FBI for raiding Trump's Mar-a-Lago resort and occasional home that morning.

The FBI search, executing a search warrant, was conducted as part of an investigation into Trump's handling of classified documents while in the White House. He's accused of removing classified documents illegally and even ripping some up and throwing them in White House toilets -- a fitting metaphor for a presidential legacy if I've ever heard one.

Most legal analysts agree this is really, really not good news for Trump. As former Acting U.S. Solicitor General Neal Katyal said on MSNBC, "If I were Donald Trump's lawyer right now, and thank God that I'm not, I would be advising my client to be telling my family that I am expecting jail time...."

Additionally, if Trump's found guilty of mishandling classified documents, he could be prohibited from holding public office again, say, in 2024.

So, it's no wonder Trump responded with a typically nuclear statement about his circumstances, calling the raid "prosecutorial misconduct," "the weaponization of the Justice System," and an "attack by Radical Left Democrats who desperately don't want me to run for President in 2024."

But make no mistake about it -- for all their spittle-soaked bluster, Trump and friends couldn't be happier this is happening now.

How do we know? Because rather than downplay or ignore the story, Trump and MAGA world are screaming about it.

Trump himself was one of the first to confirm the story, releasing that statement of martyrdom before even most media outlets caught wind of it.

His loyalists were quick to turn the story of a president who may have committed crimes while in office into one about the "deep state" he so often insisted was out to get him -- presumably for moments like this one.

That was the rather plaintive response of a man on Twitter when news broke that Kansas voters had rejected an attempt to remove the right to abortion from their state constitution. We are talking about...Read More

Back in the day, his FBI file dubbed him “an arrogant Negro.” But then, people often mistook principle for arrogance whenever African Americans insisted on justice.

Sometimes, they still do. As recently as 2017, after...Read More

“There’s a choice we’re making. We’re saving our own lives.” -- from “We Are The World”

Yes, this is early.

That ritual where the columnist assigns the year a theme doesn’t usually begin until December. ...Read More

First, however, let us turn to Merriam-Webster for clarification of a point recently made in this space that left a few of you vexed. It came in a passage that noted the right ...Read More