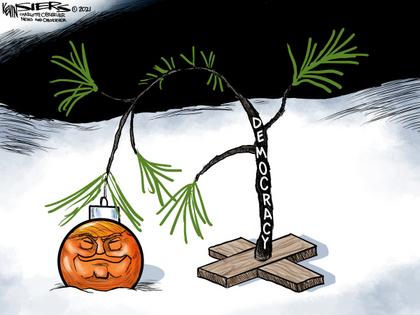 The destructive effect of this sustained attack on the underpinnings of our republic isn’t academic. One expert in foreign civil wars is warning that the United States is “closer to civil war than any of us would like to believe.” Indeed, things have deteriorated so badly over the last five years that the country no longer technically qualifies as a democracy, according to The Washington Post’s Dana Milbank, citing research by University of California at San Diego political science professor Barbara F. Walter, who serves on a CIA advisory panel called the Political Instability Task Force.

Instead, the country is now an “anocracy,” which puts it somewhere between a democracy and an autocratic state, according to Walter.

It sounds cliché to say it, but we’re at a tipping point as a nation. And as we head into a new year, with a contentious campaign season ahead, every choice we make as a country in the 12 months to come will reverberate into history.

There’s a final plaque set into the concrete on the return leg to the Visitors’ Center. The question it asks is as simple as it is towering in the challenge it poses: “What difference will you make?”

The answer has never been more important.