The Latest Confirmation Of Dysfunction in Washington 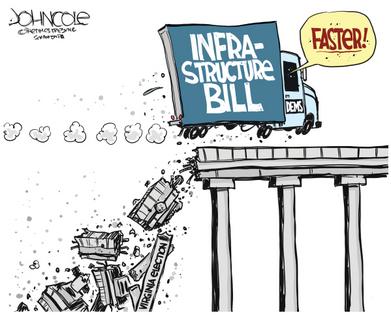 If you needed further confirmation of Washington’s current state of dysfunction, consider this: The 13 Republican lawmakers who voted with Democrats to send a $1.2 trillion infrastructure bill to President Joe Biden’s desk late Friday night are finding themselves threatened with primaries and worse for their (alleged) singular act of heresy.

There’s zero debate that the GOP crossovers, Pennsylvania Rep. Brian Fitzpatrick among them, were essential to getting the bill over the goal line. So the reaction among some Republicans, loath to give Biden a win on, well, anything, was predictably apoplectic. Even if a majority of Americans supported the bill.

“I can’t believe Republicans just gave the Democrats their socialism bill,” Florida Rep. Matt Gaetz, fumed, according to the Washington Post. “Vote for this infrastructure bill and I will primary the hell out of you,” North Carolina Madison Cawthorn, an outspoken Trump supporter, reportedly said just before the vote.

Let’s pause for a moment, shall we, to remember that the very socialism for which these Republican Quislings are being pilloried is exactly the kind of legislation that will underwrite something even the most red-blooded of conservatives once believed was a core function of government: Road and bridge construction and repairs to other essential physical infrastructure.

These Republicans also were doing something that the majority of Americans want them to do: Work with the other side to get something done.

In an August poll, 67 percent of Americans told the Bipartisan Policy Center that they’d prefer it if “their member of Congress work[ed] collaboratively to achieve solutions and pass legislation.”

For that act of public spiritedness, the GOP lawmakers are being excoriated by the likes of Rep. Marjorie Taylor Greene, who warned last week that any Republican who voted in favor would be “a traitor to our party, a traitor to their voters and a traitor to our donors.”

Pithy, sure. But one suspects, however, that the lady from Georgia got the running order wrong on who would be the more outraged.

Still, any GOP firebrand who is surprised that Fitzpatrick, the last suburban Philadelphia Republican left standing, crossed over to vote with the Dems hasn’t been paying attention. Over the past few years, Fitzpatrick, a co-chair of the bipartisan House Problem-Solvers Caucus, has voted with the Democrats on any number of key issues, including approving a $15/hour minimum wage, supporting the Paris Climate Accords, police reform, a landmark labor bill, and a measure torpedoing ex-Education Secretary Betsy DeVos’ student loan rule.

You’d also be right to point out that, when it counted, Fitzpatrick was there for the Trump White House, voting in favor of the ex-prez’s priorities 61 percent of the time, according to FiveThirtyEight.com. He was, for instance, a “no” on the second impeachment vote in January.