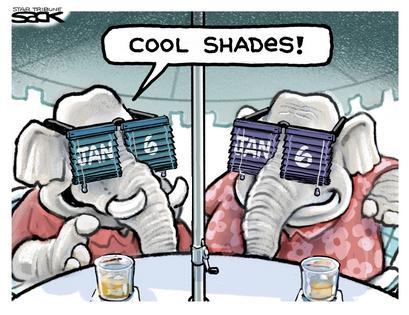 So just how desperate are some Republicans to deny the reality of the Jan. 6 insurrection at the U.S. Capitol?

Desperate enough that 21 of them voted against a slam-dunk of a bill earlier this week awarding one of the country’s highest civilian honors, the Congressional Gold Medal, to the law enforcement officers who defended them from the pro-Trump extremists who sacked the Capitol as the nation looked on in horror.

One of the lawmakers who opposed the bill, Rep. Scott Perry, a Republican and a veteran from central Pennsylvania, defended his vote, telling a reporter from Politico that the move to honor those brave officers was “all politics, it’s all garbage.”

He was one of several Republicans who objected to language in the resolution authorizing the medals that described the Capitol as a “temple of democracy,” and accurately described the events of the day as an insurrection.

Let’s pause for a moment to note here that the resolution authorizing the medals, which would be displayed at the Capitol Police headquarters, at the D.C. Metropolitan Police headquarters, at the Smithsonian Institution and in a “prominent location” in the Capitol, honors three officers who died as a result of the insurrection, according to The Hill, a publication that covers Congress.

The medal displayed in the Capitol would be accompanied by a plaque listing all of the law enforcement agencies who helped defend the Capitol against the crowd of white nationalists, off-duty police officers, veterans, and just plain wing-nuts, who stormed the building to try to stop Congress from certifying President Joe Biden’s election.

The resolution also specifically honors the heroism of then-Capitol Police Officer Eugene Goodman, who led the mob away from the Senate chamber on that fateful day, saving former Vice President Mike Pence and other senators. Goodman has since been named the Senate’s acting deputy sergeant-at-arms.

During a May interview on C-Span, where he defended his vote against a bipartisan commission to study the causes of the insurrection, Perry, who also opposed certification, downplayed the seriousness of the violence, telling a caller that “there was no arms that came in as far as I know, other than the people who were armed at the Capitol as security. No arms came into the Capitol with the people that did walk in,” WITF-FM in Harrisburg reported.

Perry’s assertions do not square with federal charging documents made public in relation to the attack, which identified a number of weapons including handguns, stun guns, chemical spray, baseball bats, and flagpoles that were wielded as clubs.

WILLIAMSBURG, Va. — An appropriately picturesque walking bridge connects the Visitors’ Center at Colonial Williamsburg to the meticulously recreated historic site about a mile away. And every step along it is a step ...Read More

To say there’s a lot riding on the U.S. Supreme Court’s eventual ruling in a case challenging Mississippi’s restrictive abortion ban is a galactic understatement.

If, as currently appears the case, the court ...Read More

Families in Michigan will set an empty place at the table this holiday season in the wake of the mass shooting at Oxford High School that left four children dead and seven more injured.

The deaths at Oxford this week ...Read More

If you needed further confirmation of Washington’s current state of dysfunction, consider this: The 13 Republican lawmakers who voted with Democrats to send a $1.2 trillion infrastructure bill to President Joe Biden’s ...Read More

If you needed further confirmation of Washington’s current state of dysfunction, consider this: The 13 Republican lawmakers who voted with Democrats to send a $1.2 trillion infrastructure bill to President Joe Biden’s ...Read More

Democrats on Capitol Hill may not be directly taking their cues from the legendary Carthaginian military leader Hannibal, but as moderates and progressives fell on each other last week over President Joe Biden’s watered-...Read More