Now Rand Paul Is In Favor of Big Government 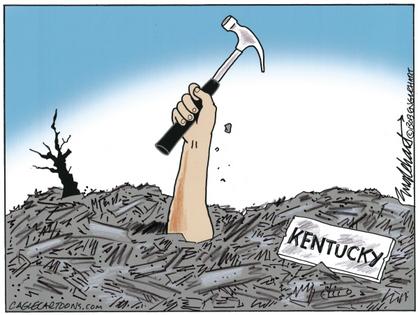 Republicans like him always equate “big government” with “socialism” and routinely condemn it as a matter of principle – until catastrophe hits their own backyard, and then suddenly, without even a scintilla of embarrassment, they dump their doltish boilerplate and plead for big government socialist money to rescue them.

Look, the tornado victims in Kentucky deserve all the help that Joe Biden can possibly provide, and he’s already doing it. But we can still take a moment to laugh ourselves silly at the letter Paul sent to the president over the weekend, where be begged for federal assistance and asked Biden to “move expeditiously to approve the appropriate resources for our state.”

Isn’t it amazing how all the idiot talk about the evils of “socialism” gets blown away as soon as killer weather ( the “new normal,” thanks to climate change) comes calling?

As he once explained, “This (relief spending) has to stop. We spend too much. We owe too much. We cannot keep spending money we do not have.”

But now that his state has been hit hard, he wants to spend as much as possible with all expeditious speed. In the past he always insisted that if the feds wanted to hike disaster spending, they should offset those costs by cutting the budget somewhere else. But lo and behold, you can read the entire letter that Paul sent to the president, and not once is there any insistence that Kentucky should be helped only if the federal budget is cut elsewhere.

No amount of air freshener can erase the stench of his hypocrisy.

Actually, that’s standard Republican behavior. Mick Mulvaney, the Trump budget director, was a congressman who voted in 2013 not to send money to New Jersey, insisting that Sandy relief should happen only if budget cuts were made elsewhere. But in 2015, when his state of South Carolina was flooded by a killer storm, he pleaded for federal money without first insisting on other budget cuts: “There will be a time for a discussion about aid and how to pay for it, but that time is not now.”

The state’s senior senator, Lindsey Graham, did the same thing. He’d voted No on the Sandy package, but suddenly, after his flood, he declared: “Rather than put a price tag on it, let’s just get through this, and whatever it costs, it costs.”