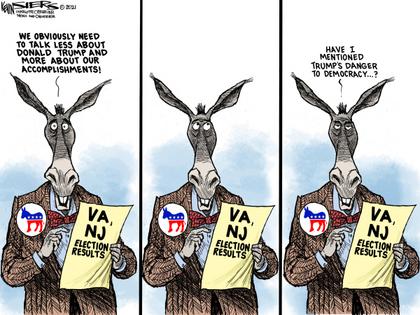 For instance, the incumbent president’s party has lost 11 of the last 12 gubernatorial races. Virginia, when choosing its chief executive, tends to vote against Washington’s “in” party. And Terry McAuliffe, the losing Democratic candidate, has never been super popular - he’s from the old-school Democratic establishment, with leftover Clinton ties, and when he won his previous gubernatorial race in 2013, he only managed to beat a right-wing nutcase by two percent. And it just so happens that deep blue states do elect red governors from time to time – most recently, Maryland, Massachusetts, and Vermont.

Nevertheless, if we point forward to the 2022 midterms and beyond, the likeliest forecast for Democrats is that winter is coming. And we know what that likely portends for the future health of democracy itself.

A president’s party almost always loses seats in midterm elections – there were recent exceptions in 1998 and 2002 – and some of the rumblings Tuesday night in Virginia fit that pattern.

President Biden’s poll numbers have slid in Virginia (a state he won by 10 points) and nationally as well. We can debate whether he deserves such a fate, but fairly or not, it’s been happening. And the issue mix that helped propel Glenn Youngkin to victory in Virginia – worries about the economy, general parental frustration with schools (some of it idiotic, but cleverly exploited by the GOP) – has potential national resonance. At the Democrats’ expense.

Youngkin also hit on a winning formula that conceivably could work for House and Senate Republican candidates next year: Be Trumpish on the stump without the baggage of Trump. Make all the requisite MAGA noises, especially in the suburbs – “I’m gonna abolish critical race theory!” (Even though it’s not taught anyway) – but do it with a friendly face. Ensure that Trump stays away, but say the stuff he says in ways that can woo back the Republican-leaning college-educated suburbanites that voted against Trump in 2020.

Meanwhile, if the current Republican minority on Capitol Hill (with the help of Joe Manchin, Krysten Sinema, and the usual Democratic infighting) can continue to stymie Biden’s ambitious attempts to make life better for average Americans, then presto!, the Democratic base voters, who always stand ready to be apathetic and disillusioned, will be increasingly inclined to sit on their asses on midterm election day – just as they did when Barack Obama’s party was routed in 2010 and 2014.

The result, of course, would be GOP takeovers of the House and Senate, and the death of any progressive agenda in advance of the 2024 presidential contest.

Oh, and did I mention that Biden’s poll slide in deep blue New Jersey has imperiled its Democratic governor, Phil Murphy, whose re-election bid remained a nail-biter well into Wednesday?

Granted, there are scenarios that could save the Democrats in time for the midterms. The pandemic could be in the rear view mirror next fall, especially now that vaccines for kids have been approved – a move that could drastically reduce parental tensions about the schools. And Democrats on the Hill this week even managed to revive a Build Back Better provision that would lower prescription drug prices, and, who knows, maybe they’ll even finally manage to pass something big that swing voters will notice. Because they need to prove they can govern; it ain’t enough to just be anti-Trump.

Democratic pollster Geoff Garin tweeted a plaintive plea Tuesday night: “Hey Democrats, the circular firing squad is the problem, not the solution. Stop. We need to pass the strongest bills we can pass with our current majorities.” Indeed. As two Democratic sources told the Politico website last night, everything “will get so much worse if we don’t pass the agenda and aren’t able to run on it…Democrats need to stop fighting each other and start delivering for voters. If we don’t, 2022 is going to be brutal.”