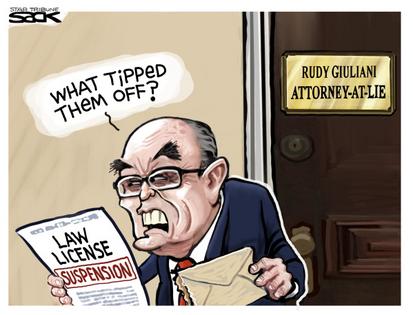 The Shakespeare character in Henry IV who said “Let’s kill all the lawyers” was clearly a tad over the top. It’s far more humane to single out the MAGA “lawyers” and humiliate them to within an inch of their lives.

What happened Wednesday, in federal court, was almost enough to rekindle one’s faith in the system. Thank goodness that the judiciary is still one place where facts matter and fascist-enabling liars get stomped. Rudy Giuliani’s law license has been suspended, as you may know, but he’s not the only one in trouble.

Check out these tart tidbits from U.S. District Judge Linda Parker, who was highly displeased that Sidney Powell, Lin Wood, and eight other Trump hacks claimed in court without a shred of actual evidence that Joe Biden’s victory in Michigan was marred by (non-existent) election fraud:

The Trumpists acted in “bad faith and improper purpose…Once it appeared that their preferred political candidate’s grasp on the presidency was slipping away, (they) helped mold the predetermined narrative about election fraud by lodging this federal lawsuit based on evidence that they actively refused to investigate or question with the requisite level of professional skepticism... (Their) politically motivated accusations, allegations, and gamesmanship may be protected by the First Amendment when posted on Twitter, shared on Instagram, or repeated on television. The nation’s courts, however, are reserved for hearing legitimate causes of action.”

Stay with me here. It gets even better:

“(A)ttorneys take an oath to uphold and honor our legal system... despite the haze of confusion, commotion, and chaos counsel intentionally attempted to create by filing this lawsuit, one thing is perfectly clear: (Powell et al) have scorned their oath, flouted the rules, and attempted to undermine the integrity of the judiciary along the way.”

Sanctions? Did she say something about sanctions?

“Sanctions are required to deter the filing of future frivolous lawsuits designed primarily to spread the narrative that our election processes are rigged and our democratic institutions cannot be trusted.”

OK then. Do tell!

“The conduct of (Powell et al), which also constituted violations of the Michigan Rules of Professional Conduct, calls into question their fitness to practice law. This warrants a referral for investigation and possible suspension or disbarment to the appropriate disciplinary authority for every state bar and federal court in which each attorney is admitted.”

How sweet it is. And that’s not all. The MAGA “legal” team was ordered to financially reimburse the state of Michigan and city of Detroit for the resources they were compelled to spend on their own defense. Because the judge said that if the MAGA team was not ordered to reimburse, it “will not be deterred from continuing to abuse the judicial system to publicize their narrative” about (non-existent) election fraud.

And there’s another sanction. This one is priceless. Powell and her compadres were ordered to attend at least 12 hours of “continuing legal education” – sort of a law-school tuneup, to acquaint them with the realities of election law and the proper filings of lawsuits. Because apparently they didn’t know that legal rules prohibit lawyers from clogging the courts with frivolous and unsubstantiated crap.

The federal ruling in Michigan is part of a broader pattern of comeuppance. We should feel good about that. MAGA hacks are being called to account hither and yon for their destructive attempts to use the courts to undermine democracy.

Earlier this month in Colorado, a federal judge ordered two Trumpists to pay the legal fees of all the individuals and companies they’d sued in pursuit of a bogus election fraud case. The judge wrote: “This was no slip-and-fall at the local grocery store. Albeit disorganized and fantastical, (the two lawyers’) allegations…are the stuff of which violent insurrections are made.”

Also this month, another federal judge (a Trump appointee, no less) ruled that Dominion Voting Systems – which is suing Powell and Rudy Giuliani (plus the pillow guy) for defamation – can indeed proceed. Singling out Powell, the judge said “there is no blanket immunity” for lying in court, for making “verifiably false” statements about the voting firm. Indeed, said the judge, “This is not a close call.”

Powell and her fellow conspirators have also been hit with a sanctions request in Wisconsin, an ethics complaint in Arizona, Lin Wood faces a probe by the State Bar of Georgia that could result in disbarment, and a judge in Washington D.C. recently ordered another Trump lawyer to face a disciplinary committee.

The legal principle is easy to understand, or it certainly should be: If you go into court with allegations, you need to back them up. It’s not enough to claim that “people are saying.” That’s snake oil for the suckers at MAGA rallies, nothing more.

Naturally, we don’t know whether these judicial smackdowns will deter future Powells from lying for similarly malevolent reasons. But it’s heartening to know that judges and lawyers’ associations are reminding practitioners that a law license does not grant its owner the prerogative of using the courts to concoct fake conspiracies that imperil our democratic way of life.