Are Democrats Going to Get Their Act Together or What? 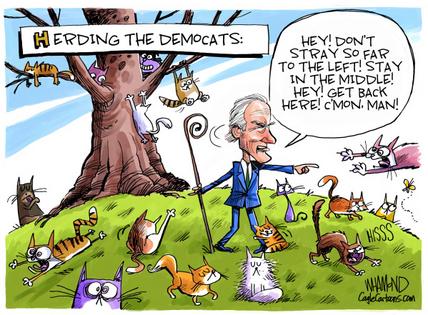 “I don’t care who started it, just knock it off!”

Well, Dad is even more pissed these days at the House and Senate Democrats. Do they somehow not understand that failing to enact President Biden’s sweeping infrastructure and social spending packages – at least in some form, with wise compromises – would be tantamount to political suicide? That their voters will dismiss them as do-nothings and stay home in droves during the 2022 midterm elections, to the delight of the galvanized MAGA hordes?

I don’t care which faction – the “centrists” or the “progressives” – has the better grievances. Just knock it off.

The centrists think the $3.5-trillion social reform price tag is too big? Well, guess what: That money would be spent over a period of 10 years, and it totals roughly 1.2 percent of the economy.

The progressives don’t want to compromise by perhaps shaving that price tag a bit? Well, guess what: The facts of life on Capitol Hill require compromise, because the Democratic majorities are thinner than dental floss and, given the unified Republican opposition, nothing will pass unless virtually every Democrat of blue and purple hue is brought on board.

That’s because Biden, despite his solid victor, had no coattails. The Democrats lost 12 House seats, and eked out a no-wiggle-room Senate majority only because Stacey Abrams ginned up grassroots turnout in Georgia.

This is not the New Deal or Great Society era, when Democrats had power in numbers. In the words of commentator Jeff Greenfield (a former Democratic operative), our current era requires “an honest embrace of what the politics of the moment will accept. It recognizes the wisdom of Ronald Reagan’s aphorism that ‘my 80 percent friend is not my 20 percent enemy.’ It argues for the kind of result that gives Democrats the only reasonable chance to wage a midterm fight where they will be weighed down by Republican perfidy in gerrymandering and voter restrictions…Without visible evidence of the Democrats’ core (agenda) – without (universal) pre-K, some form of expanded health care, some steps toward a fairer tax system – Democrats will go into next year with one or both hands tied behind their back.”

Or, as House Democrat Jim McGovern, chairman of the Rules Committee, reportedly said the other day, “If we can’t deliver on this, God help us in the next election.”

Biden staked his candidacy on the promise of leveraging his Washington experience in order to get things done – most notably, things that are long overdue (lowering prescription drug prices, expanding child tax credits, fighting climate change, repairing roads, broadening Medicare to cover dental, vision, and hearing, and much more), but it won’t help his case, or the party’s, if the squabbling rank and file makes our legislative process even more dysfunctional than it already is. If the party of government can’t prove that it can govern – and this particular week is crucial, with a looming Sept. 30 deadline to avoid a federal shutdown – then what’s the remaining alternative? The cult that doesn’t give two figs about governing?

In a sense, they’ve already won the argument.

The only road forward is to deliver something substantive, even if it falls short of the most sweeping ambitions. That way Democrats can go to the voters in 2022 and say, with empirical proof, that “we’re making a positive difference in your lives, and the Republicans opposed every single thing.”

That’s a whole lot more palatable than blowing their best opportunity in years to fix so much of what’s broken. All of them surely must realize that with democracy itself now hanging in the balance, failing to deliver is not an option.