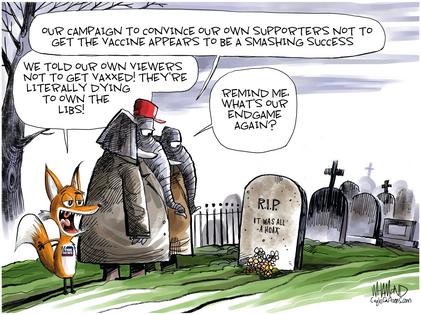 Last November – you may dimly recall, if at all – her husband Luke won a House seat but never made it to Washington. In mid-December he announced that he had COVID. Twelve days later, he died at age 41. Prior to the illness, according to his doctor, he’d been healthy as a horse. He left behind Julia and two small children.

This tragedy was bad enough. Arguably worse were the numerous dolts who insisted on social media with high confidence that COVID hadn’t killed Luke, that surely he had succumbed for some other reason – because in their authoritative view COVID wasn’t real, it was a hoax, or whatever.

When I wrote about Luke’s sudden death on Dec. 30, I was peppered with all kinds of creative emails. The big theme was that COVID was not a scientific truth, it was merely a “narrative.” So it’s nice that Julia, having won a special election to fill Luke’s House seat, has now come forward to enlighten the fools who continue to live in denial – starting with her fellow Louisianans, only 37 percent of whom have opted to get vaccinated.

And not a moment too soon, because Louisiana continues to break COVID-19 hospitalization records. One Louisiana doctor said that his facility is “admitting one Covid patient (every) 45 minutes,” and, in many places, elective surgeries are being canceled as a lower priority.

On CBS News this week, Julia Letlow said: “People don’t want to feel forced into anything or be lectured to. We are a very prideful, strong people in Louisiana. I just said, ‘What can I do? Is there anything I can do to help with the misinformation out there? With all of the confusion and fear?’ And someone asked, ‘Well, what would you tell somebody who’s on the fence about possibly receiving a vaccine?’ And I said I’d tell them about Luke. I would tell them my story.”

It’s heart-breaking, of course. He isolated himself in their house, well aware that vaccines were being rapidly developed. Julia said, “He and I prayed about the possibility of the vaccine, and we were so excited that it was coming out and that it was going to be widely available. And he missed it by two weeks.” He was admitted to a hospital shortly before Christmas, “he cried on the way,” and after that “it all happened very quickly…Where I saw the color drain, and that’s when it hit me that he might not come home.” She prayed over him, “and that’s when I left him, and I kissed him goodbye.”

Understandably, perhaps, the CBS News folks didn’t want to impinge on her moving story by asking any inconvenient questions. Such as: “Do you regret that your husband, during his House campaign, staged multiple maskless rallies and meetups?” Such as: “Looking back, was your husband wrong when he campaigned against lockdowns and told voters that ‘we have to learn to live in a Covid world’?” Such as: “Would you be as bullish about vaccines if your family had not suffered this personal tragedy?”

But setting all that aside, we should welcome Julia to the fight. She said in the Wall Street Journal: “When Luke was in the hospital, he told me numerous times that he wanted to help people understand the seriousness of the virus.” If she can goad any deniers into getting the jab, it’s a plus.

When her husband passed, I wrote: “After 330,000 deaths, how many more cautionary tales do people need to hear?” That was nearly 300,000 deaths ago, so I’ll repeat the question.