Words the MAGA Cult Don’t Want You to Hear 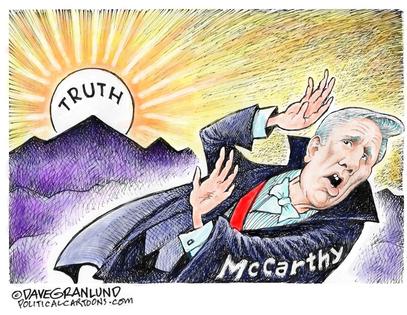 I’m literally old enough to remember when Republicans proudly branded themselves as the cop-loving guardians of “law and order.”

Richard Nixon won the presidency with that shtick in 1968, Donald Trump used it in 2016 (“I will restore law and order to our country”), and tried it again in 2020 (“I love law enforcement, I love the cops, I love the police”). So it’s ironic that in 2021, Capitol Hill Republicans sought to block the creation of a Jan. 6 inquiry that would give cops a chance to share their pain about the lawless Beer Gut Putsch.

The Republican cult didn't want you to hear from Sgt. Aquilino Gonell, who called the MAGA insurrection “a pathetic excuse for (Trump’s) behavior."

"I’m still recovering from those hugs and kisses that day," Gonell said. "If that was hugs and kisses, then we should all go to his house and do the same thing to him. To me, it’s insulting, it’s demoralizing because everything that we did was to prevent everyone in the Capitol from getting hurt... Instead of sending the military, instead of sending the support, or telling his people, his supporters to stop this nonsense – he egged them to continue fighting."

“They tortured me. They beat me. I was struck with a taser device at the base of my skull numerous times. And they continued to do so, until I yelled out that I have kids…They said, ‘Get his gun, kill him with his own gun!'”

Nor did the Republican cult want you to hear from Officer Daniel Hodges – who was crushed in a doorway, beaten with his own baton, sprayed with a fire extinguisher, attacked by goons who tried to gouge out his right eye, and was told that “you will die on your knees.”

The cult also wanted to silence Officer Harry Dunn, a Black man who was informed by the goons that he was nothing more than “a f—–g n—-r.”

And Dunn had succinct advice for the select House committee: “There was an attack carried out on Jan. 6, and a hit man sent them. I want you to get to the bottom of that.”

If only I had a magic wand, I would henceforth consign all conspiracy freaks and vaccine refuseniks (78 million in number) to some distant desert isle where they could breathe free upon each other until God sorts them out....Read More

If Bill Murray were to star in a sequel to Groundhog Day, he’d wake up to the Sonny and Cher alarm clock, take the cold shower, step in the puddle, parry the insurance agent, trudge to the gazebo…and see Chris Christie...Read More