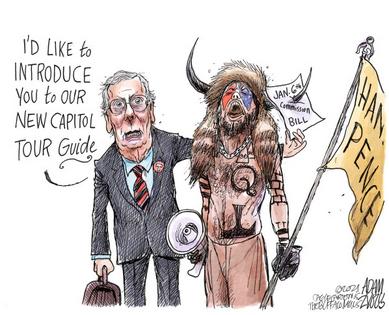 Why do most Capitol Hill Republicans oppose the creation of a bipartisan commission to investigate the deadly coup against democracy staged on Jan. 6? Duh, take one guess. They know darn well that a thorough investigation will implicate them. They can’t handle the truth.

John Thune, one of Mitch McConnell’s top lieutenants, said candidly that a sweeping 1/6 probe could hurt their prospects in the 2022 midterm elections because they “want to be moving forward and not looking backward.” That jibes with MAGA lickspittle Kevin McCarthy’s fear that a bipartisan commission could be “potentially counterproductive.”

I get what they’re saying. It’s like if Ted Bundy had declared in 1979 that he opposed his Florida double-murder trial because he feared it would be counterproductive to his freedom, that “looking backward” could land him in the electric chair.

So here’s the bottom line: If Republicans ultimately kill off the bipartisan concept negotiated in good faith by one of their own House members, fine. Let ’em walk. Their ranks are infested with domestic terrorist fellow travelers – as we saw again yesterday, just as we saw in their January refusal to certify President Biden’s win – and our longstanding American policy is not to negotiate with terrorists.

Do the commission without them. If the insurrectionist abetters are not part of the probe process, it frees up the Democrats to be more firmly in charge, with full subpoena power to unearth which House GOPers were in backstage cahoots with the MAGA rioters. Who knew what when? And in the White House, what exactly was the lame-duck loser doing while the besieged Capitol Police were waiting for military assistance? What did the insurrectionist-in-chief know during that three hour gap, and when did he know it?

If a Democratic-led commission were to ultimately deliver a devastating verdict – which is likely where the facts will indeed lead it – then of course the Republicans would try to discredit it as “partisan.” Let them do their thing. Better to have them scream at top volume from outside the probe, than to have them working to sabotage the probe from the inside. Because you know that if a bipartisan commission were to ultimately be created, McConnell and McCarthy would be free to appoint GOP members who wear the Trump armband and take their marching orders from Mar-a-Lago.

It’s despicable, of course, that the party doesn’t think the attempted violent overthrow of democracy in its own backyard is nearly as serious as (oh, for instance) the terrorist attack on Benghazi – to which they devoted more than 30 hearings conducted by nine congressional panels over a three-year span, including a select committee of their own creation with no bipartisan sheen – but this is what we’ve come to expect from a cult that’s crafting incremental fascism in plain sight.

The negotiated bipartisan commission bill states that the panel, having unearthed the truth about why Jan. 6 happened, would then seek “corrective measures” in order “to prevent domestic terrorist attacks against American democratic institutions” in the future. Who could possibly be against that? But we know the answer. Which is why Rick Wilson, a Republican strategist and one of Trump’s sharpest critics, is pleading with Democrats to grow a pair. He knows it’s futile to negotiate with terrorists:

“THEY SENT PEOPLE TO KILL YOU. Get a goddamned grip. Play offense. Drag them. Here’s what you don’t get; the Trump GOP as comprised today isn’t stupid. It’s evil. They’re smart. They’ll play to your goodwill and instinct for a bipartisan veneer on the Jan 6th issue. They’re conning you. Stop f-g around. Announce the panel. START. Don’t delay. Time is fleeting, and 2022 is roaring into position. You need to nationalize the (midterms) over, you know, the little things like whether it’s OK to send a violent, armed mob to the Capitol to overthrow an election.”

Yeah, what Rick said. Democrats have no choice, because the only choice has been thrust upon them. They can continue to indulge the GOP and pretend that this nation still has two pro-American parties…or they can do their duty and stand up for truth, justice, and the American way. Nancy Pelosi has already signaled that course of action: “If they don’t want to do this, we will.”

Dick Polman, a veteran national political columnist based in Philadelphia and a Writer in Residence at the University of Pennsylvania, writes at DickPolman.net. Email him at dickpolman7@gmail.com. Copyright 2021 Dick Polman, distributed exclusively by Cagle Cartoons newspaper syndicate.

What a shame that so many prominent figures summon the moxie to speak the truth when it’s too late to do anything about it.

So it went the other day when George W. Bush used his 9/11 anniversary address to rightly ...Read More

The Shakespeare character in Henry IV who said “Let’s kill all the lawyers” was clearly a tad over the top. It’s far more humane to single out the MAGA “lawyers” and humiliate them to within an inch of their ...Read More

The Shakespeare character in Henry IV who said “Let’s kill all the lawyers” was clearly a tad over the top. It’s far more humane to single out the MAGA “lawyers” and humiliate them to within an inch of their ...Read More

Anyone who professes to be shocked by the Taliban victory in Afghanistan has not been paying attention.

It was always bound to happen. It was merely delayed because Uncle Sam kept his trillion-dollar finger in the dike ...Read More

Anyone who professes to be shocked by the Taliban victory in Afghanistan has not been paying attention.

It was always bound to happen. It was merely delayed because Uncle Sam kept his trillion-dollar finger in the dike ...Read More